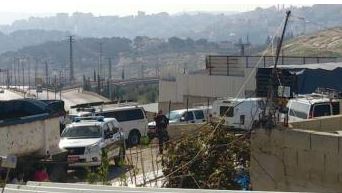 Israeli soldiers installed, Monday, a number of mobile homes on illegally confiscated, and uprooted Palestinian lands, belonging to Palestinian villagers, in the West Bank district of Bethlehem.Head of the Kisan Village Council Hussein Ghazal said the soldiers installed twelve mobile homes on the lands that were bulldozed a month ago, as part of an illegal Israeli plan to build settlement units, and factories, on approximately 650 Dunams (160.6 Acres) of Palestinian lands.

The lands belong to Palestinians from Kisan village, and from Sa’ir town in the southern West Bank district of Hebron.

Ghazal said the lands are isolated behind a wall Israel recently build, to surround the illegally confiscated lands.

“The illegal Israeli measures are not only land theft, but are also preventing any expansion of Kisan,” he said, “The villagers are losing their lands, are being choked by Israel’s settlements and its illegal policies.”