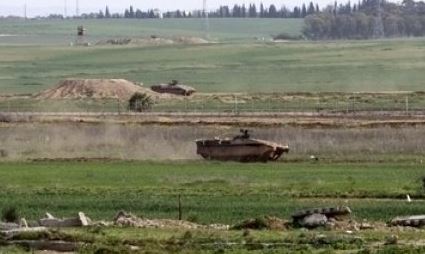 A number of armored Israeli military vehicles and bulldozers, conducted on Monday morning a limited invasion into Jabalia town, in the northern part of the Gaza Strip, and uprooted farmlands. Media sources in Gaza said at least six armored D9 military bulldozers, and several armored vehicles, advanced into northern Gaza for a distance of approximately 100 meters.

The bulldozes then started uprooting and bulldozing agricultural lands, close to the border fence, and used smoke bombs to mask their vehicles while operating in northern Gaza.

The soldiers also advanced into the eastern side of Beit Hanoun nearby town, and fired several rounds of live ammunition to force the residents out of their lands.

In related news, soldiers fired live rounds on a number of farmers while in their lands, east of Khan Younis, in the southern part of the Gaza Strip.

The army conducts daily limited invasion in the coastal region, especially in Rafah and Khan Younis, in addition to the ongoing assaults against Gaza fishers and the boats.