Dozens Injured in Clashes between Israeli Police and Ethiopian Jews 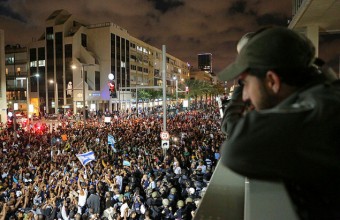 A protest in Tel Aviv, Sunday, against racism and police brutality, initiated by Ethiopian Israelis, has left some 68 people injured and 43 now in police custody, according to the Israeli police.Violence engulfed Tel Aviv’s Rabin Square on Sunday night, as thousands of demonstrators rallied following a march across major sectors of the city, PNN reported via Jpost.

The protesters ‘spun out of control,’ shut down the roads, turned cars upside down, raided shops, threw rocks and bottles at police, who fired stun grenades and charged the square repeatedly on horseback.

Sunday’s protest in Tel Aviv followed a similar one in Jerusalem on Thursday.

According to AFP, Israeli President Reuven Rivlin admitted, Monday, that Israel had made mistakes in its treatment of the Ethiopian Jewish community, describing their suffering as ‘an open wound’.

‘We have made mistakes. We did not look, we did not listen enough,’ he said in a statement after thousands of Ethiopian Israelis took to the streets over allegations of police brutality and widespread discrimination.

The Israeli state admitted, in 2013, to giving widespread contraceptive injections to women of the Ethiopian community without giving full explanation of the effects of the drug.

Demonstrations have taken place in cities across Israel in recent days.

Last week, demonstrators marched towards the residence of Prime Minister Benjamin Netanyahu in Jerusalem, where they blocked the road before being stopped by a large number of police equipped with water cannons.

Participants chanted, ‘Enough of racism!’ some waving Israeli flags, others holding up the Ethiopian flag.
‘In Europe they kill Jews because they’re Jews, here they kill Jews for being black,’ read one placard at the protest.

Those involved in recent demonstrations against police brutality have correlated Israel’s historical racism against the state’s Ethiopian Jewish community to ongoing protests in the United States against systematic racism and brutality from increasingly militarized police forces throughout the nation.

Rivlin’s attempts to address smoldering frustrations on Monday were accompanied by condemnation of the violence allegedly used by protesters during recent demonstrations, saying ‘protest is a vital part of democracy, but violence is not the answer and not the solution,’ Israeli media reported.

See IMEMC Report: 05/01/15 The Plight of Africa’s Exiles in Israel for further details.