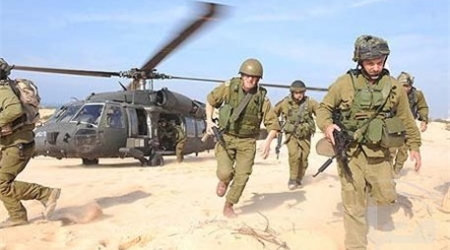 Fire erupted in a northern Jordan Valley grazing land, on Monday, after Israeli army embarked on live ammunition military training in the area, according to a local official.Aref Daraghmeh, head of Wadi al-Maleh village council, told WAFA Palestinian News & Info Agency that fire engulfed large tracts of pastures used for grazing animals. He said the army denied locals from accessing their land to put out the fire.

On May 1, Jordan Valley Solidarity, a network of Palestinian grassroots community groups, petitioned to the UN, international embassies and international NGOs to pressure Israel to stop its regular military exercises in the northern Jordan Valley.

“This training will devastate the communities of Humsa Fouqa, Ibziq and Ras ar Ahmar and all of the surrounding area once again,” said the group.

Israel is planning to annex the Jordan Valley into a completely Israeli area, primarily in agriculture, targeting to ban territorial contiguity between a future Palestinian state and the rest of the Arab world.

Last May, a senior Israeli commander admitted that training exercises in the occupied West Bank involve live fire and are used to drive local Palestinian residents off their land.

Israeli Colonel Einav Shalev, an operations officer in the Israeli military’s central command, admitted using the tactic during a subcommittee meeting of Israel’s parliament in April 2014.

The revelation was a rare official acknowledgement of a measure that critics have long decried as part of a deliberate policy by the Israeli authorities to force Palestinians out of their land.