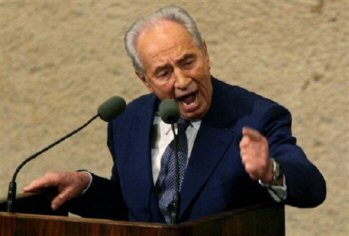 Moroccans are hailing a decision to cancel the planned visit of former Israeli President Shimon Peres as a “victory” for popular efforts.Days of Palestine reports that, this past Friday, thirty Moroccan civil and political committees released a joint statement condemning Peres’ visit to Morocco.

In the same day, a group of human rights lawyers filed papers demanding Peres arrest for war crimes upon his arrival in the Kingdom.

The Clinton Global Initiative for the Middle East and North Africa, which is to hold a conference in Marrakech between Tuesday and Thursday, removed Peres from the list of guests.

Responding to popular calls, Morocco suspended its diplomatic relations and closed Israel’s liaison offices in Casablanca and Tangiers when the second Palestinian Intifada started in 2000.

According to Ynet, in 2005, the Guardian’s Chris McGreal asked Peres “about his close dealings with the old South African [apartheid] regime, including two periods as prime minister during the 1980s when Israel drew closest to the apartheid government. His response was to brush away history. ‘I never think back. Since I cannot change the past, why should I deal with it?’ he said.”

Rights and other civilian bodies have pledged to continue their protests against all what they called “normalization” the Israeli occupation.