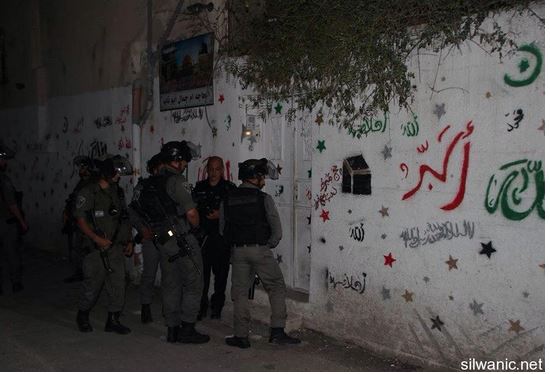 Members of the Israeli Ateret Cohanim settlement group invaded, on Wednesday at dawn, three apartments belonging to the Abu Nab Palestinian family, in the Central Neighborhood, in Silwan town in Jerusalem, and occupied them. The group alleges Jewish residents owned the apartments before 1948, when Israel was established in the historic land of Palestine.

According to the Wadi Hilweh Information Center in Silwan (Silwanic), approximately 20 settlers, accompanied by armed guards and undercover forces of the Israeli military, invaded the neighborhood, and headed towards the apartment building.

The settlers then smashed the front doors of the three apartments, and occupied them.

The owners, all family members, left their apartments on Tuesday evening, to visit one of their brothers who lives in historic Palestine, Silwanic said.

During the attack, cousins of the building’s owners, intercepted the settlers and clashed with them, especially when the assailants tried to blockade some windows, and sprayed the Palestinians with pepper-spray.

Neighbors told Silwanic that they phoned Ahmad Abu Nab and his brothers, Mohammad and Nasser, who rushed back to their building to find it surrounded by Israeli soldiers.

The army then kidnapped the three brothers, and took them to an interrogation facility.

Israeli settlement groups, including Elad and Ateret Cohanim, claim that the building was a synagogue before 1948.

The two groups are responsible for dozens of incidents in which they occupied homes in Silwan using many methods, including forgery, and in some cases offering large amounts to some owners, who were eventually seduced and sold the property, Silwanic said.