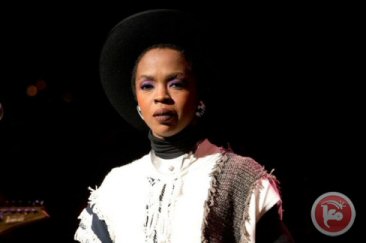 R&B star Lauryn Hill, on Monday, canceled a concert scheduled for Israeli audiences just days from now, saying that she had tried unsuccessfully to perform in the occupied Palestinian territories as well.Accordig to AFP, the former Fugees singer had been scheduled to perform Thursday, near Tel Aviv, but faced a social media campaign by activists who urged her to boycott Israel over its ongoing military occupation of Palestinian land.

Hill said that she had wanted to schedule a second show in the occupied West Bank city of Ramallah, but that the logistics ‘proved to be a challenge.’

‘I’ve wanted very much to bring our live performance to this part of the world, but also to be a presence supporting justice and peace,’ she wrote on her website.

‘It is very important to me that my presence or message not be misconstrued, or a source of alienation to either my Israeli or my Palestinian fans,’ she said.

Hill said she would ‘seek a different strategy to bring my music to ALL of my fans in the region.’

Activists had pressured Hill to cancel, with a campaign that quoted ‘Killing Me Softly’ — a cover song she is famous for — to describe Israeli policies.

The Palestinian civil society campaign for BDS calls for applying broad boycott, divestment and sanctions (BDS) initiatives against Israel, similar to those applied to South Africa during the apartheid era, until Israel meets its obligations under international law by respecting the basic right of the Palestinian people to self determination.

Israel has faced boycott calls by artists, academics and musicians including Roger Waters and Brian Eno, who hope that such cultural ostracization can change Israeli policies.