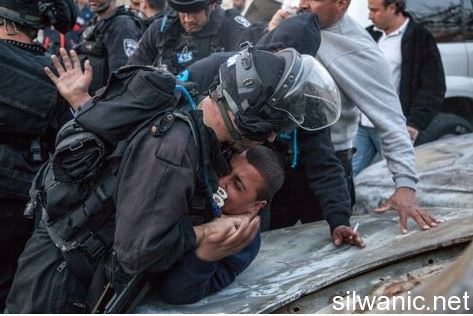 The woman was taken prisoner as dozens of Israeli fanatics stormed the Al-Aqsa Mosque courtyards, through the al-Magharba Gate, chanting against the Arabs, while Israeli officers and soldiers accompanied them.

The two have been identified as Mohammad Hussein Hamad, 18, and Wael Shawkat al-Khatib, 18 years of age.

Another Palestinian, identified as Ahmad Mos’ab Ghneimat, was kidnapped from his home in Surif town, northeast of Hebron.

Resident Yosri Mohammad Masalma was also kidnapped from his home in Beit ‘Awwa town, south of Hebron, while Amir Shawkat ‘Alqam, 18, was kidnapped in Beit Ummar town, north of Hebron.

Coordinator of the Popular Committee against the Wall and Settlements, in Beit Ummar town, Mohammad ‘Awad said the soldiers invaded various neighborhoods in the town, and searched scores of homes, especially in the town’s center, in addition to the al-Moqattam area.