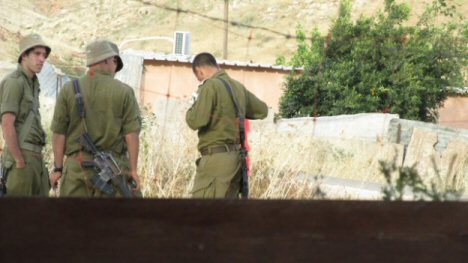 Besieged Palestinian communities in the occupied West Bank’s Jordan Valley have called on the international community to immediately intervene to halt Israeli military training in the area, which has already resulted in the temporary deportation of residents from four villages from their homes and threatens the future livelihood of these communities.Massive Israeli military training in the northern Jordan Valley began on Sunday, with forces using live ammunition around the homes and farms of Palestinian communities. The army ordered residents from four villages to leave their homes for the duration of the training (until Thursday): 18 families from Humsa, 30 families from Hammamaat al Maleh, 5 families from Frush Beit Dejan and 13 families from Ibziq.

Families in the village of Al Hadidiya were told that they may have to move for some of this period, although they were given no official documents.

“One of the greatest fears of local Palestinians is that land in the area will be set fire to – many of them have fields of wheat that are just due to be harvested, and this could destroy their entire crops”, says Rashid Sawafta, coordinator of the local group Jordan Valley Solidarity. “If scrub land is burnt by the army it will devastate the grazing land of cow, sheep and goat farmers”, Sawafta added.

“These are very real fears. On 28 April a similar military exercise in the same area of Humsa Fouqa…resulted in the destruction of 3,000 to 4,000 dunams of crops and trees after the shootings and ammunitions of the Israeli army started fire on the land and Palestinian firefighter crews were prevented from reaching the area.”

Deported residents, almost all of whom make a living from farming and livestock, will further be unable to provide food and ensure adequate shelter for their sheep, goats and other animals.

Jordan Valley Solidarity has called on the international community to take immediate action to protect the affected communities. In its appeal, JVS notes that the Israeli military actions are “tantamount to ethnic cleansing in that it directly puts pressure on Palestinian families to leave the area and not return.”