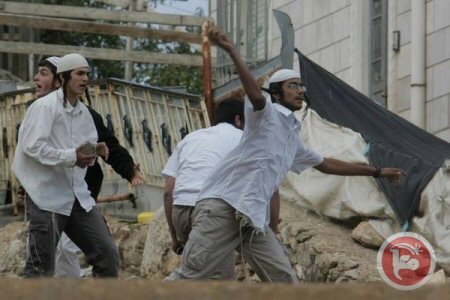 A Palestinian truck driver reportedly escaped ambush by a group of Israeli settlers, Tuesday night, while traversing a main road between Nablus and Qalqiliya in the northern occupied West Bank.The settlers had set up a checkpoint on the main road near the illegal settlement Havat Gilad before attacking the driver, according to Ghassan Daghlas, a monitor of settler activity in the region.

Ma’an News Agency reports that the truck driver, identified as Rajih Nasr from Halhul in the southern West Bank, stopped his truck as he approached the checkpoint believing it was a police checkpoint. A mob of settlers immediately charged the driver in attempt to seize him.

Realizing he had been ambushed, Nasr managed to run away, driving his truck in the direction of Huwwara village, in the south of Nablus.

Nasr received several punches to the head, with some of the settlers allegedly trying to stab the driver and attack him with pepper spray as he attempted to flee the scene, Daghlas said.

An Israeli army spokeswoman told Ma’an she was ‘looking into the incident’, though such crimes are rarely punished by Israeli authorities.

The Havat Gilad settlement nearby the attack is considered an unauthorized outpost by the Israeli government, and one of of many settlements considered illegal by the international community.

Monday night, Palestinians reportedly threw Molotov cocktails at a settler-owned bus near Nablus, resulting in a town raid and curfew imposed on Huwwara by Israeli forces. Settlers then staged a march in protest of Palestinian attacks.

Settlers in both occupied East Jerusalem and the West Bank often gravitate towards private Palestinian lands and carry out acts of violence against residents with the protection and, often, the deliberate assistance of Israeli forces.

In 2014, there were 324 incidents of settler violence against Palestinians in the occupied West Bank, according to the UN Office for the Coordination of Humanitarian Affairs.