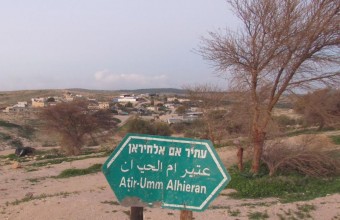 The Israeli Supreme Court, on Tuesday, issued a final decision to demolish and displace the people of Atir-Umm Al-Hieran, a Palestinian village which remains unrecognized in the Negev desert of southern Israel.The decision will be utilized to establish a Jewish-only settlement upon the ruins of the Bedouin village, which has the population of more than 1,000 Palestinians, this just days before the anniversary of the Palestinian Nakba.

According to the PNN, the court’s final decision, issued by a majority of two judges against one, came after 13 years of judicial proceedings and attempts to cancel the demolition and eviction orders.

The court in its decision admitted the Israeli intentions to demolish the village in order to establish a settlement ‘with a Jewish Zionist majority,’ according to the decision.

According to the court, the people of the village of Atir did not enter the land illegally, but were ‘relocated’ to it in back in 1956, by an Israeli occupation authorities official order, after they were expelled from their villages of origin during the Nakba in 1948.

Following the relocation, the court claimed that Israel only ‘allowed’ the Palestinian refugees (which it forcibly displaced) to use this land and, therefore, these people can be expelled from it at any given moment.

For its part, Adalah center, commenting on the decision, said that the Supreme Court was coveting behind the dry law, which gives Israel the right to lay hands on the land, and completely ignore the humanitarian, political, social and historical dimensions of the cause and the lives of its people. The law legitimizes the demolition of an entire village and the displacement of its children.

‘The demolition of this village is a pure proof of the Israeli racism and its foremost goal, which is the displacement of as many Palestinians possible, for colonial goals of establishing Zionist settlements on the ruins of another nation.’

Adalah center assured to follow up with the case, through the villagers and human rights organizations and associations, in addition to taking legally preventive measures, in order to defend the village and prevent the demolition and displacement.

Israeli occupation court, on Monday as well, issued an order to deport the population of Susiya village near Yatta, south of Hebron. The decision followed Israeli settlers’ appeal to the court a month ago, demanding the displacement of Palestinian natives, for the expansion of the settlement constructed on Susiya lands.