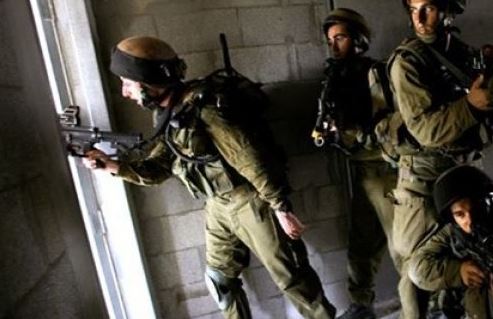 The army also searched a number of homes, near the Ibrahimi Mosque in Hebron city, and interrogated several families, before kidnapping two brothers identified as Mousa Sayyed Ahmad, 19, and Mohannad Sayyed Ahmad, 17.

Furthermore, soldiers invaded the ‘Arab ar-Ramadin village, south of Hebron, clashed with dozens of local youths, causing injuries, and kidnapped a Palestinian teen after beating him up.

Eyewitnesses said the soldiers attacked and kidnapped Moheeb Hasan Zagharna, 17, and took him to an unknown destination.

Dozens of schoolchildren of the ‘Arab ar-Ramadin School suffered the effects of tear gas inhalation, during clashes that took place after the soldiers destroyed a nearby electricity network.

In related news, Israeli military sources said two soldiers were injured when their jeep flipped over during an invasion into Taffouh village, west of Hebron. The army moved the two soldiers to a hospital for treatment.

Furthermore, soldiers invaded the al-Far’a refugee camp, north of the northern West Bank city of Nablus, and clashed with dozens of local youths, seriously wounding one Palestinian, and kidnapped another.

Medical sources said the soldiers shot Rabea’ Jamal Mubarak, 22, with two live round to the back and abdomen, and that the young man was moved to the Rafidia Hospital, in Nablus, suffering a serious but stable injury.

In addition, soldiers invaded Beit Sahour city, in the West Bank district of Bethlehem, and searched a home belonging to resident Rafat Qosta Issa; the army withdrew later without conducting any arrests.