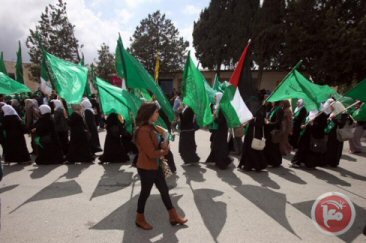 Human Rights Watch, on Thursday, accused Palestinian security forces of arresting or questioning West Bank students over their political opinions, saying several had been mistreated.’It is deeply worrying that students are being held by Palestinian forces for no apparent reason other than their connection to Hamas or their opinions,’ said Sarah Leah Whitson, HRW’s Middle East and North Africa director.

‘Palestinians should be able to express critical political opinions without being arrested or beaten,’ she further stated, according to AFP.

Citing prisoner rights group Addameer, HRW said 25 students had been arrested in the wake of the annual student council vote at Birzeit University near Ramallah on April 22.

The vote, which takes place at universities across the West Bank, pits Fateh-supporting students against those backing the rival Islamist Hamas movement, with the poll in Birzeit won by Hamas.

Three days after the vote, the security forces arrested Jihad Salim, a representative of a Hamas-affiliated student group at Birzeit, and held him for about 24 hours, during which time he was beaten while being questioned about the elections.

‘They started cursing my mother, cursing my sisters, slapping me around. Then they punched me, while asking questions about how Hamas won the elections,’ he told the watchdog.

Three days after that, Ayman Abu Aram, a former member of the same group, was also held for 24 hours and quizzed about his relationship with Hamas, his lawyer said.

On April 30, Musab Zalum, another Hamas-affiliated student said the security forces had raided his house, but he was not home, forcing him to stay away from both his home and the main university campus.
Questioned by the New York-based watchdog, Adnan Damiri, spokesman for the Palestinian security forces confirmed there had been arrests but denied there was a political motive.

‘We never arrest people for their speech or for their political affiliations,’ he was quoted by the watchdog as saying.

In November 2014, Ayman Mahariq, a journalism student at Al-Quds University, was arrested and beaten for posting remarks critical of the security forces on Facebook. He is facing criminal charges in a trial which will begin on June 8.

And in January, Bara al-Qadi, another media student at Birzeit, was arrested over remarks on Facebook criticizing the Palestinian Authority.

He is facing charges for ‘insulting a public official’ in a trial which will begin on June 10, HRW said.