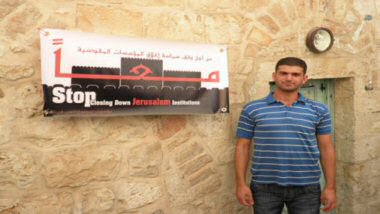 Israeli authorities have shut a Palestinian health NGO in the East Jerusalem neighbourhood of Shuafat, Thursday, under the 1948 Prevention of Terrorism Act. Another step in Israel’s oppression of the Palestinian community in Jerusalem. Israeli intelligence officials and police raided the Shuafat office of the Health Work Committees early Thursday morning. The closure order presented, valid for one year, states that ‘Under the Prevention of Terrorism Act of 1948 and after the conviction that this place is used in terrorist activities, we decided to close it for one year from this date.’

Israeli police confiscated the group’s computers and demanded that two staff members appear for interrogation at an Israeli intelligence facility.

The Health Work Committees (HWC) is a non-governmental health and development organization, established in 1985 to meet the health care needs of the Palestinian population living under occupation. Its Shuafat office in East Jerusalem housed the group’s school health prgramme, which since 1990 has provided medical exams, preventative screenings, health education and vaccinations to Palestinian students in more than 62 schools in Jerusalems.

“We call on all national and international legal, human rights and health organisatins to force the occupation to revoke this arbitrary and unust decision”, states the HWC, which declares this latest decision is part of the wider Israeli campaign targeting Palestinian residents of Jerusalem.

Israeli oppression of Palestinian civil society in general, and the HWC in particular, is not new. In 2009 Israeli authorities shut down the HWC’s Nidal Center in East Jerusalem’s Old City, also under the aforementioned “prevention of terrorism” act. Closed for three years before reopening in late 2012, Nidal acts to empower and strengthen Palestinian youth in occupied East Jerusalem.

Speaking to the Alternative Information Center (AIC) in September 2012, when the Nidal Center reopened, al-Ghoul said that “while these past three years have been difficult, we restart our activities with even more determination to strengthen the Palestinian community in Jerusalem”.