‘We Bombed Civilians for Entertainment.’ 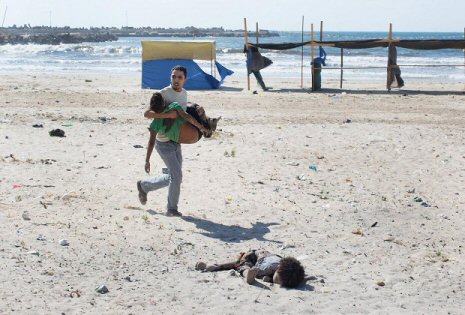 An Israeli soldier has said that he and his colleagues bombed civilian in Gaza Strip during last year’s Israeli offensive “for entertainment”.In an interview conducted on Tuesday with a 20-year-old Israeli soldier named Arieh, he said: “I was called to service early on July 2014 and was deployed to the Gaza Strip but until that time the operation [Operation Protective Edge] was not announced yet.

“Only some soldiers speculated that there will be war, but later our commander told us to imagine a 200 metre radius and to immediately shoot anything moving inside this circle.”

He stressed, according to Days of Palestine: “We bombed civilian targets for entertainment,” noting: “One day at about 8am we went to Al-Bureij; a densely populated refugee camp in central Gaza, and the commander told us to select a random target and shoot it.

“At the time we did not see any Hamas fighters, no one shot at us, but the commander told us jokingly: ‘We have to send Bureij a morning greeting from the Israeli army.’”

“I remember that one day, a soldier from our unit was killed and our commander asked us for revenge so I drew the tank randomly towards a huge white residential building, just four kilometres away from us and fired a shell at the 11th floor. I must have killed civilians who were absolutely innocent,” he continued.

The reason for that, he said “To create the largest possible damage to the agricultural land and the economy. Hamas had to pay an expensive bill in order to think twice before entering into a new conflict with us.”

“We destroyed many Palestinian buildings, farms and electricity poles. They told us that ‘we must avoid civilian casualties as much as possible’, but how could you do that when they ask you to leave behind so much destruction,” he wondered.

Arieh said: “During the operations in the Gaza Strip, the unit commander said: “‘If you see someone in front of the tank who does not immediately flee, you must kill him.’ so he could see that there are civilians.”

He continued: “We used shells excessively, when I saw anything moving, if an open window, I would shell it. If I saw a moving car, I would fire a rocket. We fired missiles at moving objects and not individuals. We did not see moving individuals in our surroundings, but we fired anyway.

“I can confirm that we only saw civilians, we did not see any Hamas fighters. We knew they moved through tunnels.”

Arieh is one of about 60 Israeli soldiers who agreed to testify in a report prepared by Israeli human rights organisation Breaking the Silence.