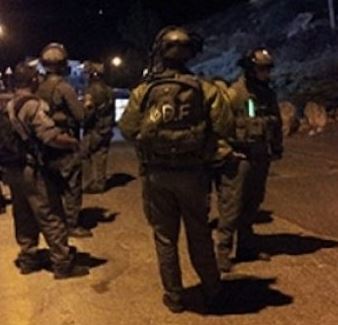 Dozens of Israeli soldiers invaded, on Friday at dawn, various Palestinian communities in the northern West Bank district of Jenin, broke into homes and searched them, and occupied several rooftops.Eyewitnesses said the soldiers invaded Ya’bad, ‘Arraba and Marka towns, south of Jenin, installed roadblocks, and interrogated several Palestinians while inspecting their ID cards.

In addition, soldiers installed roadblocks on the main entrances of Marka and ‘Arraba nearby towns, searched cars, and conducted searches in the two towns, and around them.