Israeli soldiers attacked, Friday, the weekly nonviolent protest against the illegal Israeli annexation wall and settlements, in Bil’in village, near the central West Bank city of Ramallah, causing dozens to suffer the effects of tear gas inhalation.The protest started in the center of the village, where dozens of locals accompanied by Israeli and international peace activists gathered before marching while carrying Palestinian flags and posters, and chanted slogans demanding ending the Israeli occupation, and its ongoing violations.

The protest marked the Palestinian Nakba when Israel was established in the historic land of Palestine, after displacing and removing hundreds of Palestinian villages and towns.

The protesters called for ongoing struggle against the occupation, and against the extremist Israeli government on Benjamin Netanyahu.

Coordinator of the Popular Committee against the Wall and Settlements in Bil’in, Abdullah Abu Rahma, said the soldiers used excessive force against the nonviolent protesters, and fired dozens of gas bombs, and toxic smoke bombs, in addition to rubber-coated metal bullets.

Abu Rahma added that several Israeli military jeeps also invaded the village from its western side, and fired gas bombs at a number of homes, causing a man, his wife and their three children, to suffer severe effects of tear gas inhalation.

Late on Thursday at night, soldiers invaded Bil’in, and kidnapped Wael al-Khatib and Mohammad Hamad, after invading their homes and violently searching them. The soldiers also attacked the families of the two kidnapped Palestinians. 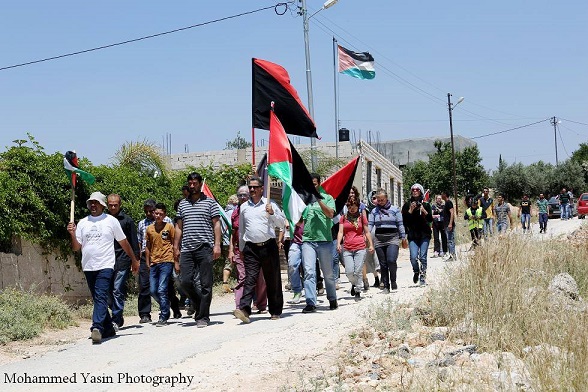