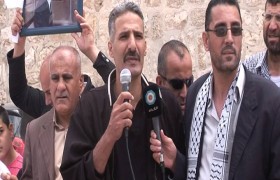 On the thirteenth anniversary of the deportation of Palestinian freedom fighters, following the siege of the Church of the Nativity, in Bethlehem, the families of deportees held a march in front of the church, in Manger Square, calling on the international community to fulfil their responsibility to end the forced exile of their family members. Dozens of residents, families of the exiles, citizens and a number of officials staged a solidarity march for deportees, this Sunday afternoon in Manger Square, on the thirteenth anniversary of their deportation.

Participants raised banners bearing pictures of all deportees and slogans calling for their freedom and their return.

According to the PNN, the deputy governor of Bethlehem, Mohammed Taha, said that this was in order to raise the voice of the people deported from Bethlehem who were expelled in 2002 to various international locations, as well as Gaza Strip. He added that this vigil was to call on the whole society to demand the political leadership seek all possible avenues and are tireless in their efforts to return the exiles to Bethlehem, to their homes, their parents, and their families.

The mother of the exiled Fahmi Canaan said ‘13 years passed since the removal of my son and all the bitterness and suffering in every moment waiting for his return, we call for all people of conscience in the world to take a stand in order to find a solution to their cause and their return to their families. It is unreasonable that we live in a world that claims to stand for freedom, democracy and rights but not for the rights of those who have suffered removal from his homeland and his family.’

Chairman of the Higher Coordinating Committee of Popular Resistance Committees, Munther Amira, pledged to the deportees that the battle for their return, as well as for the return of refugees and the release of prisoners, would continue. He said that this demonstration was a national message acknowledging that these deportees had paid with their youth for the Palestinian cause and that it was the responsibility of the Palestinian people to be faithful to these deportees.

Search IMEMC: ‘Church of the Nativity’