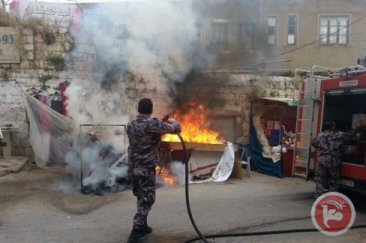 A fruit and vegetable vendor set fire to his stand in the West Bank city of Tulkarem, on Sunday, in protest over a decision by local authorities to remove the stand, which was his main source of income.Local sources told Ma’an News Agency that Palestinian police arrested 30-year-old Muhammad Awwad, after he set fire to the stand.

Awwad set up the stand near a mosque in the center of Tulkarem, in the northern occupied West Bank, in the hope of earning a living after he was released from the Israeli prison system several months ago.

A number of municipal councils across the West Bank have cracked down on street vendors in recent years,claiming that they disrupt movement of vehicles and people and are unattractive in appearance.

In 2013, a street vendor attempted to set himself on fire in Nablus after police confiscated his fruit stall.
Muhammad Yaesh, 40, poured gasoline on himself near a roundabout in the city before police prevented him from setting it alight.

Yaesh, who provided for a family of 12, told Ma’an after the incident: ‘I decided to set myself on fire, and to pour gasoline on myself, because I reached a desperate level. I reached a level where life and death are equal to me and have the same meaning.’

The attempted act recalled Tunisian street vendor Muhammad Bouazizi, who in 2010 set himself alight following the confiscation of his stand, an act that sparked the Tunisian Revolution and revolutions across the wider Arab world.

In 2013, al-Monitor reported that Palestinian protesters in Ramallah held posters bearing slogans such as: ‘No salaries, no carts. God help us,’ and ‘Where is justice for the people, Abbas and Fayyad?’

The article asserted: ‘The fact that it was the self-immolation of a poor Tunisian cart-seller that catapulted the Arab revolutions at the end of 2010 seems to be lost on the PA government officials, who are concerned with synthetic appearances over the interests of the people they claim to represent.’