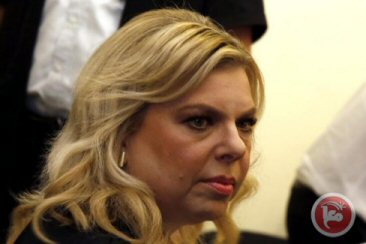 Israeli Prime Minister Benjamin Netanyahu’s wife Sara has hit back at what she says is a smear campaign over her alleged mistreatment of domestic employees, media reported on Monday.She railed that her ‘blood has been spilled publicly’ at an ongoing trial Sunday over her alleged abuse of the former caretaker at the premier’s residence, just months after she was alleged to have pocketed public funds through bottle deposits.

‘It’s hard to be Sara Netanyahu with what they do to us, spilling blood,’ newspapers quoted her as saying.
In March, former caretaker Meni Naftali sued the prime minister’s office and the Netanyahus for 650,000 shekels ($170,000) in compensation for alleged abuse, in a lawsuit that saw petty recriminations aired by both sides.

Naftali was quoted by Ynet news website as saying that in nearly two years of employment between 2011 and 2012, he was treated in a ‘patronizing way’.

He said this included ‘uncontrolled tongue-lashings’ from Sara Netanyahu.

AFP further reports that, in one incident, Naftali says the premier’s wife rebuked him at 3:00 a.m. one day for buying milk that was not in a carton, Ynet reported.

The caretaker also alleged he was not paid for overtime and that the premier’s office reneged on a promise to give him a permanent job.

At Sunday’s hearing in the case, Netanyahu accused Naftali of hitting her son’s friends when they visited the residence, the Jerusalem Post reported.

The case was adjourned, and it was unclear when the next hearing will be.

The Netanyahus have dismissed the allegations as an attempt to sully their image.

Before Netanyahu’s March reelection campaign, media reported that his wife had pocketed at least $1,000 worth of public cash by collecting the deposits on empty bottles returned from the official residence.
Her husband denied the allegations.

A report by the government watchdog also said Sara Netanyahu had called in an electrician for their private seaside residence home in northern Israel every weekend for three months, including on a public holiday when staff were off and unable to assess whether work was urgently needed.

The Netanyahus have complained that the reports were part of a media smear campaign, which commentators say was waged in part by media mogul Arnon Moses, head of the Yediot Aharonot newspaper and Ynet, who firmly opposed Netanyahu remaining prime minister.

Mrs Netanyahu on Sunday compared Moses to ‘he who cannot be named,’ a character in the popular Harry Potter books and movies.

This was a reference to the villain Lord Voldemort, the Times of Israel news website reported.

Benjamin Netanyahu was reelected for his third consecutive term on March 17, and formed a right-wing religious government last week.