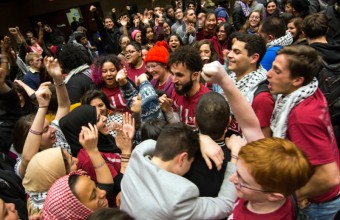 At dozens of college campuses across the US, student government councils are embracing resolutions calling on their administrations to divest from companies that enable Israel’s violations on Palestinians, the New York Times reports.While no university boards or administrators are heeding the students’ demands, the effort to pressure Israel appears to be driving a wedge between many Jewish and minority students.

The movement is part of the Boycotts, Divestment and Sanctions campaign (BDS), which has spread in recent years both in Europe and the United States. The issue has received intense attention on campus particularly since the Israeli attack on Gaza last summer, which killed more than 2,200 Palestinians, wounded about 11,000 and demolished more than 100,000 residential homes.

Related: Israeli Soldiers Describe ‘Losing Their Sense of Morality’ During the Gaza Conflict

According to the Palestinian News Network (PNN), there are now Israel-related divestment groups at hundreds of major colleges. The coalitions have caught many longtime Jewish leaders off guard, particularly because they belonged to such progressive coalitions less than a generation ago.

At one Northwestern University in Illinois year, the student government debated a divestment resolution for more than five hours, as students with clashing views sat on opposite sides of the room. Some of the talk was openly hostile, with charges of racism and colonialism.

‘Discomfort is felt by every person of color on this campus. To those who say this divestment bill makes you uncomfortable, I say: Check your privilege,’ an Egyptian-American senior, Hagar Gomaa, told the New York Times.

A speaker who identified herself only as a Chicana student said she was there to support Palestinians on campus.

‘We have seen the racism of people who get mad that so many empowered minorities are recognizing how their struggles are tied to the Palestinian struggle,’ she told the New York Times. ‘Students have accused us of conflating many cases of oppression. To these students, I have a couple of words for you: What you call conflation, we call solidarity.’

A student who said she had family in Israel was among those who shot back for the other side. Voting for divestiture, she told the newspaper, is ‘pointing fingers, it’s aggressive, it’s misinformed, it’s unjust, and — most important for this campus — it’s totally one-sided.’

When the vote was finally taken by secret ballot, the tally was close, with 24 in favor of asking Northwestern’s administration to divest — which it did not do — and 22 against.

As the debates spill from undergraduate council to dorm room, students and college officials are grappling with where to draw the line between opposition to Israel’s policies in the West Bank and Gaza — a position shared by many Jews — and hostility toward Jews. Opponents of divestment sometimes allude to the Holocaust.

Everywhere, the discussions are long and tense. At several schools where divestment proposals have been considered, swastikas have been painted on the doors of Jewish fraternities.

At Barnard College, which is one-third Jewish, a group called Students for Justice in Palestine put up a banner last year saying, ‘Stand for Justice, Stand for Palestine,’ showing a map of the area with no internal border demarcating Israel.

The banner was taken down the next morning after Jewish students complained that it made them feel threatened.

Jannine Salman, the member of Columbia Students for Justice in Palestine who made the banner, told the NYT that anti-Zionism, not anti-Semitism, was the motive — and that the recent formation of a campus chapter of Jewish Voice for Peace, which favors divestment, should drive home the point.