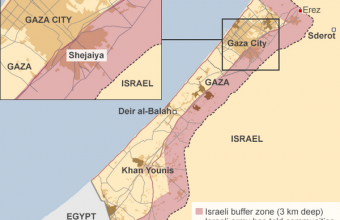 Following disengagement from the Gaza Strip in September 2005, Israel unilaterally and illegally established a so-called ‘buffer zone’, an area prohibited to Palestinians along the land and sea borders of the Gaza Strip. The precise area designated by Israel as a ‘buffer zone’ is not clear and this Israeli policy is typically enforced with live fire. The establishment of the ‘buffer zone’ is illegal under both Israeli and international law.Preventing Palestinians from accessing their lands and fishing areas violates numerous provisions of international human rights law, including the right to work, the right to an adequate standard of living, and the right to the highest attainable standard of health. Enforcing the ‘buffer zone’ through the use of live fire often results in, inter alia, the direct targeting of civilians and/or indiscriminate attacks, both of which constitute war crimes.

Following the Israeli offensive on the Gaza Strip in November 2012, a ceasefire agreement between Israel and Palestinian armed groups was brokered by the Egyptian government, which included terms related to access to land and sea. In an online statement on 25 February 2013, the Israeli Coordinator of Government Activities in the Territories (COGAT) declared that fishermen could now access the sea up to six nautical miles offshore, and that farmers could now access lands in the border area up to 100m from the border fence. However, both references have since been removed from the statement.

Following the latest Israeli offensive on the Gaza Strip (08 July – 26 August 2014), a ceasefire agreement between Israel and Palestinian armed groups was brokered by the Egyptian government, which allowed fishermen to sail up to 6 nautical miles. However, the Israeli naval forces have not allowed fishermen to sail up to this limit as all Israeli attacks have taken place within the 6-nautical- mile fishing area.

On land, inside Palestinian territory

Distance from the border fence, up to which access is permitted:

In reality, attacks against civilians take place anywhere upto approximately 1.5 kilometres inside the border fence. This constitutes approximately 17% of the total territory of the Gaza Strip.

At sea, off the coast of the Gaza Strip

Distance from the shore, up to which access is permitted:

In addition, access is consistently denied in the following areas:

· 1.5 nm in the north along the maritime boundary with Israel

· 1 nm in the south along the maritime boundary with Egypt

land, can only be accessed under high personal risk, as Israeli attacks may

result in injury or death of civilians.

· 95% of the restricted area is arable land.

· After the evacuation of settlements (2005) and ‘Operation Cast Lead’

(2008-2009), the majority of Palestinian families living in the border areas

abandoned their land and homes.

· Palestinians are completely prevented from accessing 85% of the

· Approximately 65,000 persons, including individuals who work in the

fishing industry and their dependents, are affected by the ‘buffer zone’

· The area near the coast is markedly over-fished.