Ashrawi: ‘Nakba did not end with the creation of Israel’ 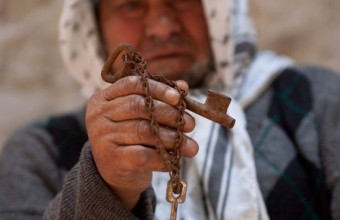 Dr. Hanan Ashrawi: “The Nakba did not end with the creation of Israel; rather, it is an ongoing process that seeks to displace Palestine and replace it with ‘Greater Israel’ at the expense of its people and their rights.”On the occasion of the 67th anniversary of the Nakba, PLO Executive Committee member Dr. Hanan Ashrawi stated:

‘In 1948, Israel destroyed 531 Palestinian towns and villages and took control of an additional 774, and more than 800,000 Palestinians were forced to become refugees.

However, the Nakba (“catastrophe”) did not end with the creation of Israel; rather, it is an ongoing process that seeks to displace Palestine and replace it with ‘Greater Israel’ at the expense of its people and their rights. For the past sixty-seven years, Palestinians have been subjected to countless injustices and an ongoing cycle of violence, terror and war crimes, while Israel has pursued systematic and dehumanizing policies of military occupation, apartheid and ethnic cleansing. These include Israel’s illegal settlement enterprise, apartheid walls and checkpoints, the demolition of Palestinian homes, structures and villages and the confiscation of land and resources in Jerusalem and Area C, the eviction of Palestinians from their homes, the revocation of Jerusalem IDs, the imprisonment of more than 6,000 Palestinian political prisoners, the implementation of racist and discriminatory laws, legislation and practices against the Palestinians, the targeting of the Al-Aqsa Mosque compound and its worshipers, and the continued siege on Gaza and the horrific wars waged on its people, among other violations of international law.

Palestinian people, whether the indigenous population in Israel or under occupation in the 1967 territories or in exile, remain vulnerable and continue to be victimized by Israel, as well as regional developments.

Currently, there are more than seven million Palestinian refugees residing in the Occupied Palestinian Territory and in exile; the majority of them live in thirty-one refugee camps in Jordan, Lebanon and Syria. This Palestinian refugee crisis remains a disastrous problem that must be resolved and put to an end by the international community in accordance with international law and conventions, including the United Nations General Assembly Resolution 194 (1948), the 1951 Geneva Convention Relating to the Status of Refugees, the International Covenant on Civil and Political Rights (1966) and the Universal Declaration of Human Rights (1948).

In spite of Israel’s systematic and flagrant efforts to negate and erase our history, culture, heritage, and narrative, we will remain steadfast and resilient with our non-violent resistance and determined efforts to stay on our land.

The Palestinian leadership is committed to pursue diplomatic and multilateral initiatives to safeguard the rights of the Palestinian people and to ensure self-determination, independence and justice for all Palestinians. We will continue to join multilateral organizations and agencies and move forward to ensure accountability for Israel in the International Criminal Court and in other venues.

We are not accidents of history, and it is time for the tragic injustice of the Nakba and the grave suffering of the Palestinian people to end.”