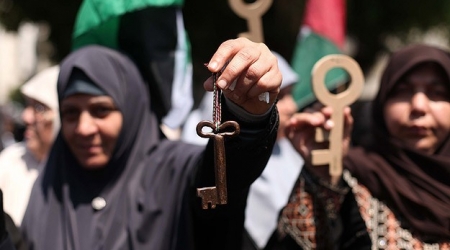 In a massive protest march, thousands of Palestinians marched Wednesday, to late Palestinian President Yasser Arafat’s square in Ramallah, to commemorate the 67th anniversary of the Nakba which befell the Palestinian people in 1948.The Nakba, an Arabic word for ‘catastrophe’, is the term given to the forced displacement or expulsion of some 800,000 Palestinian refugees before, during and since the creation of the state of Israel, WAFA reports.

Marked by Palestinians throughout the world every May 15th, the Nakba represents a historic injustice, where approximately 800,000 Palestinians or 67% of the Palestinian people by 1948, became refugees and approximately 418 Palestinian villages were depopulated and/or destroyed, said PLO Negotiations Affairs Department.

The events featured speeches delivered by key Palestinian officials, in addition to national musical performances by Palestinian traditional troupes. Protestors with Palestinian Keffiyeh draped around their shoulders hung up big banners stressing the Palestinian refugees’ internationally-recognized right to return to their homes they were expelled from and condemning the Nakba. Similar events were organized across the West Bank districts.

These events came a week after Israeli Prime Minister Benjamin Netanyahu formed his coalition government which includes ministers who are honest about their racist and genocidal tendencies against the Palestinian people.

The newly-nominated Israeli Justice Minister Ayelet Shaked has called for murdering Palestinian mothers so that they do not bring out more ‘snakes’. Similarly, the Head of the Israeli Civil Administration Ben Dahan has openly supported ethnic cleansing and genocide.

In a press release, the Palestine Liberation Organization (PLO) affirmed that having this new racist right-wing Israeli government formed, any call for the resumption of negotiations would be meaningless unless a deadline is set not for completing the negotiations, but for ending the Israeli occupation of Palestinian territories that started in 1967.

The PLO slammed the Nakba as ‘the most heinous modern crime against humanity’ that the Zionist gangs perpetrated in an attempt to obliterate the existence of the Palestinian people and establish their entity by means of murder and intimidation.

“Over the last 67 years, Israel has been inflicting a Nakba ‘catastrophe’ upon the Palestinian people utilizing the same terrorist mentality that paved the way to its creation at the expense of the political rights of the Palestinian people, including the right to self-determination on the land of our forefathers,” the PLO said in the press release.

Meanwhile, Badil Resource Center for Palestinian Residency and Refugee Rights said, “The Nakba fundamentally altered Palestine. However the idea of forcible displacement of the indigenous Palestinian people did not end with the establishment of Israel in 1948, it rather started that year.”

“Since the Nakba almost every passing year has witnessed a wave of forcible displacement, whereby in some years the wave is higher than in others. So for instance during the year 1967, another 400,000 Palestinian became refugees,” added the center.

It stressed that, “Forced population transfer is illegal and has constituted an international crime since the Allied Resolution on German War Crimes, adopted in 1942. The strongest and most recent codification of the crime is found in the Rome Statute of the International Criminal Court, which clearly defines forcible transfer of population and implantation of settlers as war crimes.”

Andalou Agency further reports, via Al Ray, that sixty-seven years have now passed since the Palestinian Nakba and the forced eviction of more than 700,000 Palestinians from their ancestral homes and villages.

Nevertheless, the only UN resolution granting these Palestinians the right to return to their homes and villages continues to be mere ink on paper.

The resolution sent a ray of hope to Palestinians forcibly evicted from their villages after the creation of the state of Israel.

Nevertheless, year after year, this ray of hope has turned into frustration – and then fury – because of the failure to implement the resolution.

This failure boils down to the fact – among other things – that UN General Assembly resolutions are not binding.

Article 11 of the resolution says that refugees wishing to return to their homes and live at peace with their neighbors should be permitted to do so at the earliest practicable date.

It adds that compensation should be paid for the property of those choosing not to return and for loss of or damage to property which, under principles of international law or in equity, should be made good by the government or authorities responsible.

This means that Resolution 194 directly recognized the right of Palestinian refugees to return to their homes and villages, deeming this an important principle of international law.

It also gave refugees the freedom to choose whether or not to stay where they were or return to Palestine.
Years passed and the Palestinians’ hope of returning dimmed. Worse still, most of the refugees who were alive when the resolution was adopted are no longer living.

The Nakba generation is no longer alive today for the most part. They left this world holding onto the keys of the homes they left behind when they had to leave their land.

They also died as they waited for the UN resolution to be implemented.

He said the resolution calls for the return of the refugees and for compensating those who do not want to go back to their homes.

Abu Badawieh noted that soon after adopting the resolution, the UN founded two agencies to help the Palestinians, namely, the UNRWA and a mediation committee that sought to find a lasting solution to the Palestinian refugee problem.

‘The committee stopped working, however, in the early 1960s,’ Abu Badawieh said. ‘This means that the UNRWA is about the only international agency working to help the Palestinian refugees.’

He noted that the Palestinian Authority, which rules part of the occupied West Bank, keeps pressuring the international community to implement Resolution 194.

He added, however, that Palestinian refugees started to lose hope when peace negotiations kicked off in 1991, followed by the signing of the Oslo Accords in 1993.

‘Oslo does not mention that Resolution 194 was one of its references,’ Abu Badawieh said. ‘On the contrary, it depends on other resolutions that do not refer to the Palestinians right of return.’

Secretary-General of the Palestine Liberation Front, Wasil Abu Youssef, for his part, said the right of return was at the ‘heart’ of the Palestinian issue.

‘By the same token, nobody can disregard or abolish Resolution 194,’ Abu Youssef told Anadolu Agency.
He said the resolution has never been implemented because of the international community’s failure to put pressure on Israel in this regard.

The Israel -Palestine conflict began in 1917 when the British government, in the now-famous ‘Balfour Declaration,’ called for ‘the establishment inPalestine of a national home for the Jewish people.’
In 1948, a newly-formed state inside historical Palestine – ‘Israel’ – was established.

The Palestinian diaspora has since become one of the largest in the world. Palestinian refugees are now spread across Jordan, Lebanon, Syria and other countries, while many settled in refugee camps in the Palestinian West Bank and Gaza Strip.

The right to return to their homes in historical Palestine remains a key demand for many Palestinians.