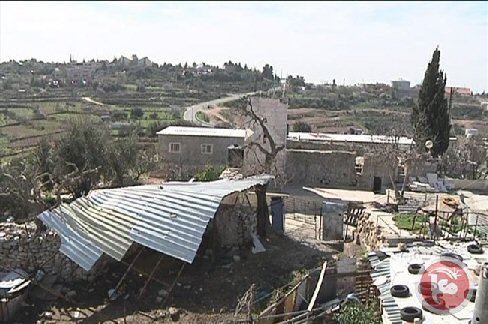 Over 30 residents in the small village have received demolition warrants, Atallah said, adding that villagers are gradually leaving because Israel’s military forces do not allow any new construction.

Khallet Sakariya is located in the center of Israel’s Gush Etzion bloc adjacent to the Jewish-only settlement of Rosh Zurim.

Around 2,000 dunams of the total area of 9,000 has been confiscated by military forces, Atallah added.

Also on Wednesday, Israeli forces blocked off all entrances leading to the town of Taqou, east of Bethlehem, preventing residents movement in and out of the area, according to a local official.

Head of the town’s municipality, Taysir Abu Mfreh, informed WAFA that Israeli forces deployed and set up surprise flying checkpoints at all entrances leading to the town, preventing residents’ movement.

It said that, “Prolonged checks and searches at some of the checkpoints, humiliating treatment by soldiers, and long lines deter Palestinian drivers from using some of the roads still open to their use. As a result, Palestinian movement on some of the main roads in the West Bank has decreased, and these roads are used almost exclusively by settlers.”