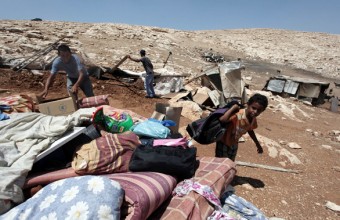 In continuity with the previous executive, the infant Israeli government will not stop the policy of destroying ‘illegal’ Palestinian homes. Entire Bedouin villages at risk.The Israeli Prime Minister builds and demolishes. Brick by brick he builds his government – yesterday he presented a list of ministers and was given trust by the Knesset – and yet no signs of stopping the political destruction of Palestinian homes, ‘illegal’ according to the Israeli law.

The last few days have been dramatic in this respect. Susiya, Araqib, Umm el Hiran, Semiramis, the names of the Arab towns where demolitions have occurred or will soon occur. At Semiramis, between Jerusalem and Ramallah, according to the decision of an Israeli court, eight buildings will be demolished, because it was built on land belonging to Israelis since 1971. In addiction, those who lived so far, 107 people in 23 apartments, will also pay a fine of 11,000 Euros.

The inhabitants do not give up, and repeated that the land where the buildings were built was purchased 13 years ago by a group of Palestinians.

A fine high two million shekels (half a million dollars) will have to pay instead the Bedouin families to Araqib, near the desert of the Negev, guilty of having rebuilt their village for 83 times after many demolitions carried out by the Israeli occupation authorities. The expulsion also awaits families in Susiya, a poor village south of Hebron: the Israeli Supreme Court has sentenced the legitimacy of the demolition of their miserable homes.

The most upsetting case for the Palestinians is that of Umm el Hiran, always in the Negev, one of the victims of the Prawer Plan that wants the eviction, even by force, of 70,000 Bedouins with Israeli citizenship.

For some time the 700 inhabitants of this village never recognized by the authorities crossed their fingers and hoped that the demolition orders would fall. Then last week, with the trial of two in favor and one against, the High Court of Justice, has validated the order of eviction against Umm el-Hiran and given the green light to the expulsions. A incomprehensible judgement since the inhabitants were not accused of being squatters and had not ‘illegally occupied’ lands or private domain. The Israeli military government in fact had moved them there in 1956 after being forced to leave Khirbet Zubaleh in 1948. So there was nothing illegal in the presence of the villagers that the government intends to move to Hura, village established in 1989, in order to make way for the new Jewish town Hiran.

Atir will also be destroyed to allow the expansion of the forest of Yatir. Looking forward to ‘take over’ the Bedouins are dozens of Israeli families currently camped in a close area. To them, the authorities have taken steps now to provide electricity and water while the inhabitants of Umm el-Hiran had their essential services been denied for decades.

The dissenting opinion of Judge Daphne Barak-Erez has been for nothing. She proposed to her colleagues to give the Bedouins the right to live in the new town of Hiran. ‘The ruling – said bitterly Amjad Iraq, the lawyer of the NGO Adalah who followed the case of Umm el Hiran – has demonstrated once again that the High Court is more interested in protecting the politics and the character of the Jewish State than that of the principles of democracy and justice’.

The fact that an Arab village in Israel can be destroyed as easily as one of the Occupied Territories, reinforces the fear among the Palestinian citizens of Israel on the possibility to defend their collective rights through the legal system.

Just a few days ago at least two thousand Palestinians of Israel marched I the streets of Tel Aviv, to protest against the demolition of “illegal” houses (about 50 thousand) in the villages with an Arab majority in Israel and the growing scarcity of housing for the Arab minority. Adalah complaints the underinvestment in building in Arab areas of Israel, only 4.6 percent of the total new homes built in Israel. In 2014 in the Jewish communities 38,261 new housings were built against the 1,844 in area mostly populated by Arab Israelis.

Things are not going well in the Occupied Territories as well, of course. In 2014, according to data from OCHA, the UN Office for Coordination of Humanitarian Affairs, nearly 1,200 Palestinians have seen their homes demolished by the bulldozers: 969 in the West Bank and 208 in East Jerusalem. And in the meantime the construction of another 900 homes in the Jewish settlement of Ramat Shlomo have been approved in the Arab area of ​​the occupied holy city.

Also from the PNN: Israel Paving the Way for Another Nakba?