Elderly Woman Suffers A Broken Hand After Soldiers Attacked Her 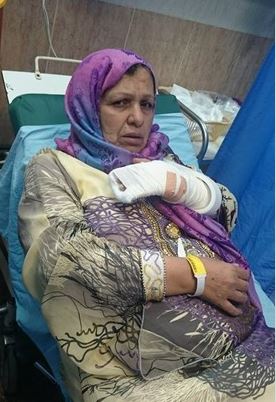 Palestinian medical sources have reported, on Wednesday evening, that an elderly woman suffered a broken hand, and various cuts and bruises, after Israeli soldiers attacked and beat her on the al-Karama Border Terminal, while heading back home from Jordan.The woman, Yosra Mohammad Qatesh, 60 years of age, was detained for nearly 24 hours while on her way back home in ‘Azzoun town, east of the northern West Bank city of Qalqilia.

Her son, Mohammad Abdul-Aziz Kharfan, said the soldiers repeatedly attacked his mother, and broke her wrist and hand, while violently pushing her into their vehicle.

He added that his mother went to Amman several days ago to renew her Jordanian passport since she carries a Jordanian National Number, as part of her preparations to go to Mecca for pilgrimage.

“We were surprised to hear that the soldiers detained my mother, they held her from noon Tuesday until midnight,” Kharfan said, “They later transferred her to the Ma’ale Adumim police station, where she remained until 6 in the morning, Wednesday.”

He added that, after the soldiers kidnapped his mother, they told her they intended to move her to the al-Maskobiyya interrogation center in Jerusalem, and that two male officers and a female soldier started insulting her, and pushing her around, before forcibly placing her in a military vehicle, causing fractures and bruises to her wrist.

The police later moved the woman to a hospital in Jerusalem, were doctors placed cast on her wrist and hand, before she was released.

The police confiscated her Jordanian Passport, and drove her to the Ma’ale Adumim Junction, where she was released; she was instantly moved to a Palestinian hospital from treatment.