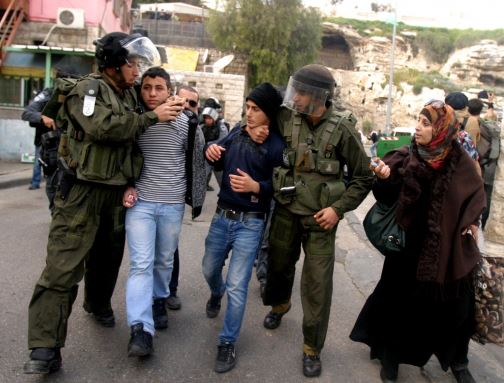 Local sources said the soldiers broke into and searched a number of homes, interrogated families, and kidnapped Tareq al-Jahalin, 19, and Ziad Wael ‘Issa, 19, from the al-Baloa’ area.

Soldiers also invaded the al-‘Azza refugee camp, north of Bethlehem, and handed resident Fadi Jihad ‘Adawin, 22, a military order for interrogation in the Etzion military and security base, south of Bethlehem.

In addition, soldiers invaded the southern area of Hebron city, in the southern part of the West Bank, broke into homes, and kidnapped one Palestinian identified as Mohammad Fadel Abu Hammad, 18.

Soldiers also invaded Toura al-Gharbiyya village, west of the northern West Bank city of Jenin, and kidnapped Wafa Moayyad Qabaha, 23, after stopping him on a sudden roadblock, installed west of the village.

The three have been identified as Wasfi Ismael Bazar, Baseel ‘Asad Darwish and Mahdi Maher Rayyan.

Another Palestinian, who remained unidentified until the time of this report, was kidnapped in Bab al-‘Amoud area, in occupied East Jerusalem, and was moved to the Police station in Salah-Eddin Street.

Rajoub, who also served as the Minister of Waqf and Islamic Affairs, was kidnapped on July 14, 2014, and received three consecutive Administrative Detention orders, holding him captive without charges.

Six days ago, Rajoub was moved to the Ramla Prison Clinic for a medical checkup as he suffers a flipped disc, in addition to a number of issues in his joints and knees.