Abbas: “The Palestinians Will Remain Steadfast In Their Homeland” 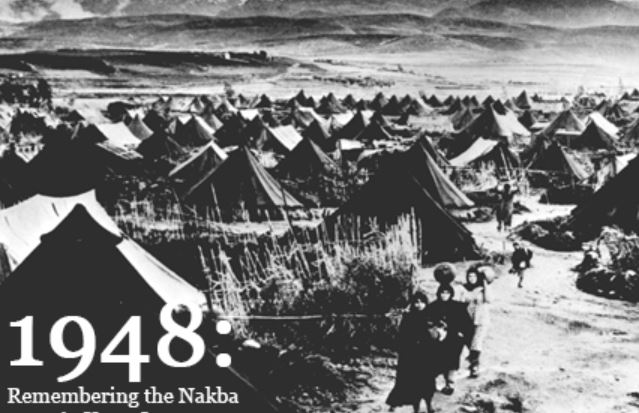 Palestinian President Mahmoud Abbas stated that the Israeli agendas of ongoing occupation and aggression have failed to end the Palestinian cause, while the Palestinian people remain steadfast in their homeland, and in exile, determined to achieve their legitimate rights.His statements came during a speech marking the Palestinian Nakba of 1948 when Israel was established in the historic land of Palestine, after destroying hundreds of villages and towns, and depopulating more than 700.000 Palestinians.

“What happened in 1948 will not happen again, our people are steadfast and are determined to stay in their homeland, to defend it and achieve independence,” Abbas said, “United, we will foil all Israeli plans and conspiracies to marginalize the Palestinian cause; we will never accept a state with interim borders.”

“The Palestinian cause is not just the millions of refugees, our cause is a struggle for national liberation, self-determination and dignity,” President Abbas said, “What Israel is doing violates International Law, has no legitimacy; all of its settlements are illegal, East Jerusalem is an essential part of the anticipated independent Palestinian State, it is our capital.”

He added that the popular nonviolent resistance against the brutal Israeli occupation and its colonies is a legitimate struggle that will continue.

“Those responsible for the ongoing Israeli crimes, the atrocities, will be prosecuted by the International Criminal Court,” Abbas stated, “the files of Israel’s colonies and its crimes, including last summer’s onslaught on Gaza, will be submitted to the ICC.”

Commenting on resuming direct political talks with Tel Aviv, Abbas said negotiations cannot resume while Israel is ongoing with its settlement activities in occupied Palestine, and that Israel must release all detainees, especially those who were captured since before the first Oslo agreement.

He added that the Palestinian leadership is not interested in extended political talks that just grant Israel more time to build and expand its colonies, to continue its violations, and said that such talks require a clear time-frame for ending the occupation by the end of 2017.

“The new Israeli government and its head Benjamin Netanyahu must choose between occupation and peace,” the president added, “Should they continue the colonialist policies, we will resume our international activities, including the UN and the ICC, to end this illegal occupation.”

In addition, Abbas said that the internal divisions must be ended, and that all factions are required to place the national interests of the Palestinian people above their own policies and interests, in order to serve the best interest of the Palestinians.

“God willing, we will rebuild what Israel destroyed in Gaza,” he said, “Our national interests are nonnegotiable, we will defend our people, and we will act on providing them with the needed protection.”

Abbas further stated that the Palestinians, in every part of this world, especially in the Yarmouk refugee camp in Syria, must receive with the urgently needed international protection.

He also saluted all Palestinian political prisoners, stating they represent the symbols of sacrifice, determination and unity, and added that ensuring the release of the detainees is a top priority.