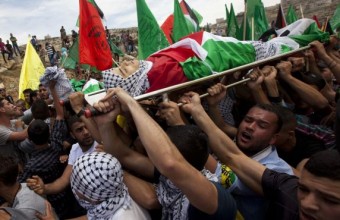 One year ago, on May 15, Nadeem Nowarah, 17, was shot and killed by Israeli forces near Israel’s Ofer military prison in the occupied West Bank. An hour later, Mohammad Mahmoud Odeh Salameh Abu Daher, 16, was fatally shot in the back in nearly the same spot.View the interactive story

Nadeem’s family and friends were struck hard by his loss. We All Died That Day, a short film produced by DCIP, attempts to provide a glimpse beyond the headlines to see the impact prolonged military occupation has on Palestinian families.

Both boys were tragically slated to become just two more names in a long list of Palestinian children killed by Israeli military and police violence since 2000. That is, until video footage of the killings went viral.

The video, obtained and released by DCIP, depicts both boys collapsing to the ground after being shot, and their seemingly lifeless bodies being carried away off camera by other protesters. CCTV cameras fixed on the building where the boys were shot captured the incident, and showed that neither boy posed any lethal or imminent threat to Israeli forces at time they were killed.

On November 23, 2014, Israeli prosecutors filed a manslaughter charge against a border police officer, identified as 21-year-old Ben Deri, for allegedly causing Nadeem’s death. Since then, he has been under house arrest, while Nadeem’s family continues to wait for justice. No one has been held accountable for Mohammad’s killing.

DCIP has already taken critical steps to pursue justice for Nadeem and Mohammad—by releasing security camera footage that captured the moment when both youths were fatally shot, and a Forensic Architecture video analysis pinpointing Nadeem’s killer. Both families deserve to see their sons’ killers held accountable for their crimes.