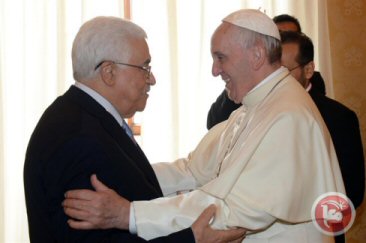 Pope Francis met President Mahmoud Abbas on Saturday, calling him ‘an angel of peace,’ days after the Vatican said it was preparing to sign its first accord with Palestine, to the anger of Israel.Abbas met the pontiff for about 20 minutes for a private audience, a day before the Pope is due to canonize two Palestinian nuns, who will become the first Palestinians to gain sainthood.

On Wednesday the Holy See announced that it was preparing to sign its first treaty with Palestine, two years after officially recognizing it as a state.

A bilateral commission is putting the final touches to the agreement, on the Catholic Church’s life and activities in Palestine, which then ‘will be submitted to the respective authorities for approval ahead of setting a debate in the near future for the signing,’ the Vatican said on Wednesday.

Some observers speculated that the agreement could be signed during Abbas’s visit.

The news of the treaty immediately drew ire from Israel:

‘Israel heard with disappointment the decision of the Holy See to agree a final formulation of an agreement with the Palestinians including the use of the term ‘Palestinian State’,’ said an Israeli foreign ministry official.
‘Such a development does not further the peace process and distances the Palestinian leadership from returning to direct bilateral negotiations. Israel will study the agreement and consider its next step.’

According to AFP. the agreement, 15 years in the making, expresses the Vatican’s ‘hope for a solution to the Palestinian question and the conflict between Israelis and Palestinians according to the Two-State Solution,’ Antoine Camilleri, the Holy See’s deputy foreign minister, said in an interview earlier this week.

In an interview with the Vatican’s Osservatore Romano newspaper, Camilleri said he hoped ‘the accord could, even in an indirect way, help the Palestinians in the establishment and recognition of an independent, sovereign and democratic State of Palestine.’

The Palestinian Authority considers the Vatican one of 136 countries to have recognized Palestine as a state, although the number is disputed with several recognitions by what are now European Union member states date back to the Soviet era.

Abbas’s visit came a day before two nuns who lived in Ottoman Palestine during the 19th century will be made saints at a Vatican ceremony.

Marie Alphonsine Ghattas of Jerusalem and Mariam Bawardy of Galilee will become the first Palestinian Arabs to gain sainthood.

Ghattas was born in Jerusalem in 1843 during the Ottoman era and died in 1927 at the outset of the British Mandate over Palestine. She set up the Holy Rosary Sisters dedicated to women’s education and empowerment, which today has Today the Holy Rosary Sisters have reputable schools in Palestine and in other Arab countries. She was beatified — the final step before canonization — in 2009.

Bawardy was born in Galilee, now in northern Israel, in 1843. She became a nun in France and died in Bethlehem in 1878, establishing a convent in Bethlehem in 1876 which still exists until today. She was beatified by Pope John Paul II in 1983.

The recognition of Palestinian Christians by the Pope urged Abbas Saturday to openly express his value of Palestine’s Christian community, which makes up around 8 percent of the population in the occupied West Bank.

‘On this holy occasion we would like to express appreciation to our Palestinian Christian brothers for their steadfastness and effective contribution to building the Palestinian nation, and we call upon them to stay with us and not to be easily swept by the tide of migration,’ Abbas said in a statement, referring to increasing levels of Christian emigration from Palestine in recent years due to restraints placed by the Israeli occupation.

Although there are several saints who lived in the region during Christianity’s early days, Bawardy and Ghattas are the first to be canonized from Ottoman-era Palestine.

The canonization of a third Palestinian — a Salesian monk — is still under review by the Church.