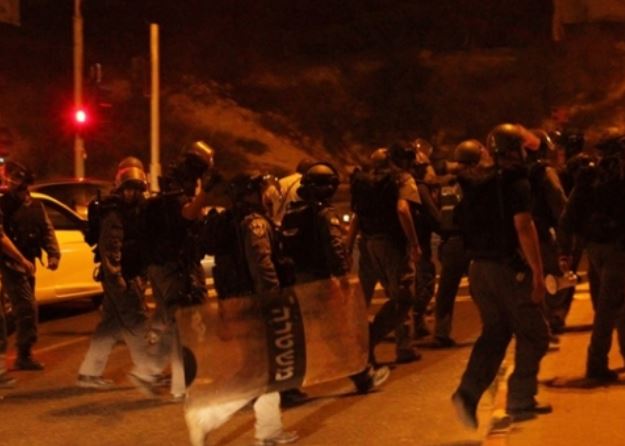 As thousands of Palestinians marked, on Friday, the 67th anniversary of the Palestinian Nakba, Israeli soldiers resorted to the excessive use of force against the protesters, causing dozens of injuries.The Palestinians held protesters, starting on Friday afternoon, in different parts of the occupied city, and the West Bank.

The protesters affirmed national Palestinian unity, and ongoing struggle against the Israeli occupation of Palestine.

Hundreds of protesters marched in various alleys and streets in the Old City of occupied Jerusalem, challenging the soldiers who were extensively deployed in an attempt to stop the procession.

Clashes took place with the soldiers in Ras al-‘Amoud area, one of the most prominent gates of the Old City, after the soldiers used excessive forces against the protestors.

In addition, hundreds marched in Jabal al-Mokabber neighborhood, southeast of occupied Jerusalem marking the Nakba of 1948, and chanted against the ongoing Israeli occupation and aggression, including Israel’s illegal policies of home demolitions. Several mild injuries were reported.

Hundreds also marked the Nakba in Ras al-‘Amoud area, in Silwan town, south of the al-Aqsa Mosque, and commemorated the death of a local child, Milad ‘Ayyash, who was killed by army fire in 2011.

The Follow-Up Committee in the al-‘Isawiyya town, south of the Al-Asa Mosque, said the soldiers fired dozens of gas bombs, firebombs, and rubber-coated metal bullets on Palestinian protestors.

Clashes also too place near the main entrance of the Shu’fat refugee camp, in the center of Jerusalem.
The Israeli Police issued a statement revealing the three Border Guard officers have been injured, in the Suwwana neighborhood, on Friday at night.

In addition, at least ten Palestinians were injured in clashes that took place with the soldiers on the northern entrance of the ar-Ram town, north of occupied Jerusalem, and were moved to local medical centers.

In addition, soldiers invaded the main entrance area of the Qalandia refugee camp, north of Jerusalem, kidnapped several Palestinians, and installed a roadblock on the Jaba’-Qalandia road, northeast of Jerusalem.