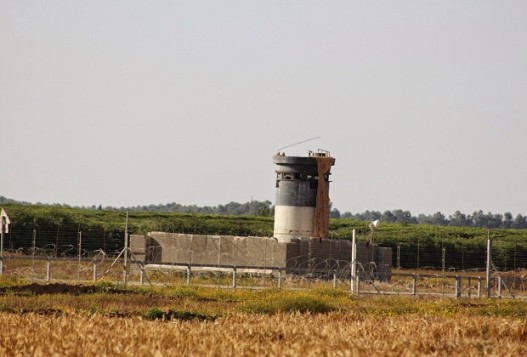 ‘Memories of the 1940s and 1950s were damaged by the Israeli occupation which occupied our lands, killed our sons and damaged out crops,’ the old man said.Palestinian farmers describe the dangers on their life when they are in their farms as Israeli forces open fire at them from time to time.

‘This is the most dangerous moments for me and my family members along the whole year,’ farmer Said Ali, 43, said while counting his steps walking to the hay pile with packs of wheat straws tightened to his own back.

Ali is one of the hundreds farmers in the Gaza Strip facing the same dangers when they work in their farms near to the eastern borders of the coastal enclave.

Israeli occupation imposes a non-man military zone along the borders of the Strip that ranges between 100 to 500 metres wide. It depends on the nature of the land.

While the Israeli tanks and armoured military vehicles wandering nearby along the borders, Ali is fearful and cautious while harvesting the wheat and barley on his seven dunam-farm, adjacent to the borders.

On Saturday, two Palestinian farmers were wounded when the Israeli occupation forces opened fire at them when they were picking aubergine on their farm in the south of the Gaza Strip.

Similar incident took place on last Friday, when Israeli snipers positioned on the border in the north of the besieged territory shot a Palestinian farmer, causing him serious injuries.

“This is an almost daily experience,” says Ali. “Israeli tanks could be seen from time to time aiming their barrels towards us all the time when we are here [in the farm]. We feel that we are in the crosshairs of Israeli snipers.”

IMEMC: In the video below, farmers returning to farm the land in Abassan, where Israeli soldiers had opened fire on them 2 days previously, were able to harvest their parsley crop for only half an hour before soldiers again began to shoot.

A number of shots were fired into the air before the soldiers started to aim in the direction of the farmers and international support.

One third of farms ‘inaccessible’

Not far from Ali, his neighbour Salma Hussein, 51, was rearing her traditional dark dress and almost hidden by the wheat crop, says: “I come to my farm in the early morning and start working very fast in case I am targeted by the Israeli forces.”

She does not know why the Israelis target the Palestinians in their land. “We are civilians and they know very well that we pose no danger to them.” Hussein added that she and her family have been there for decades.

Nearby, we spotted an 80-year old man who was, along with his wife and sister, harvesting their barley crop. Tawfiq al-Hajjar had arrived on his farm at 8:30am. When we approached him to speak about his crops, gunfire could be heard, fired from the Israeli side of the border.

Al-Hajjar ignored the shots, but his sister insisted that he should leave. They collected what they had harvested, packed it onto a donkey cart and fled.

We were unable to speak; therefore, we interviewed him at home. “You have seen the way we live with bare eyes,” he told us and left. After about half an hour, he came back with new clothes and three cups of coffee with a handful of sweats.

“When I was your age,” he addressed us, “I spent day and night in our farm, but that about 50 or 60 years ago. That memories of that time were damaged by the Israeli occupation which occupied our lands, killed our sons and damaged out crops.”

This old man was eighty years, but in fact he looked a youth, but the most difficult problem, he refused to allow us take a picture for himself. When we insisted, he said: “You can have a picture with me, but do not publish it anywhere, please.”

Additional photos and links at Days of Palestine. 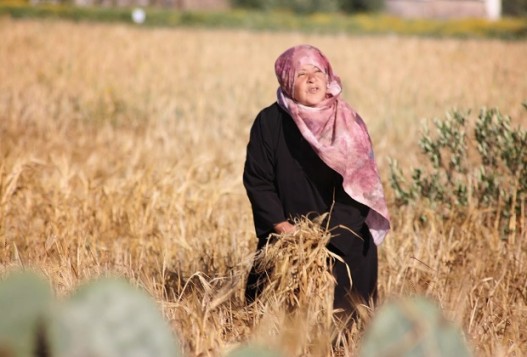