Israeli soldiers stalk 5-year old, spraying sewage-smelling water at him until he falls 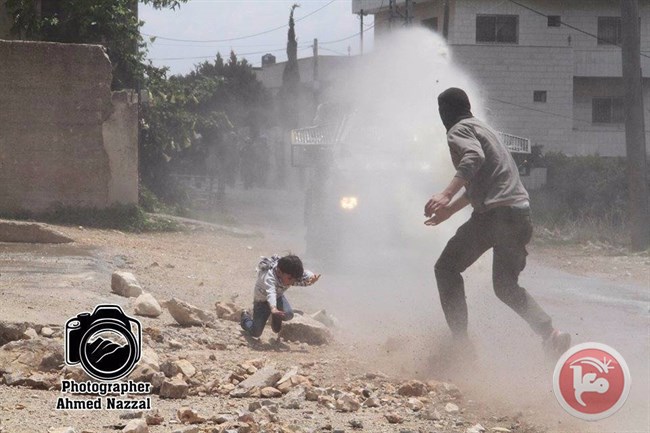 A group of Israeli soldiers were captured on camera chasing down a five-year old child in Kafr Qaddoum, spraying him with foul-smelling ‘skunk water’ until he fell down on some rocks.The incident took place around the time of the weekly non-violent protest on Friday against the Wall and Settlements, but the child was not participating in the protest when he was targeted by the soldiers.

The series of photos, taken by local amateur photographer Ahmad Nazzal, show in the first shot a soldier reaching out his hand to the small child, who instead turns around and goes in the opposite direction of a row of armed soldiers stationed in his village street.

An Israeli armored military truck with a high-velocity sprayer then approaches behind the boy spraying the ‘skunk water’ at him. The boy runs away with the truck pursuing him, then falls down on some rocks, where an adult finds him and picks him up to bring him to safety.

Israeli soldiers have been documented on thousands of occasions taunting, stalking, beating and abducting small children. But even when documented, these attacks rarely lead to any repercussions for the soldiers — despite the direct violation of the UN Treaty of the Rights of the Child.

The ‘skunk water’ sprayed at the child is sold to the Israeli military by a private company named ‘Odortec’, which markets its product as ‘the most cost-effective solution for law enforcement agencies concerned about keeping down budgetary expenses’. Those on the receiving end have described the liquid as smelling like a combination of decaying bodies and raw sewage, saying it is the worst thing they have ever smelled. When it touches a human body, the smell remains for days.

Last year 75-year-old Rubhiya Abd al-Rahman Darwish was hospitalized after she was hit with ‘skunk water’ in Bethlehem. In addition to spraying the liquid at people, the Israeli military also takes its sprayer truck down popular tourist areas in Bethlehem and sprays the buildings with the material, making the area very inhospitable for residents and visitors.

No explanation has been provided for the Israeli military for the targeting of the five-year old in Kafr Qaddoum on Friday.