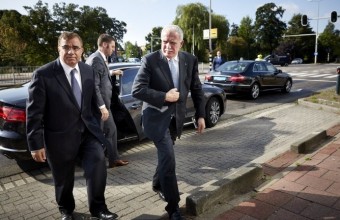 The Palestinian foreign minister, Riyad Al-Maliki, said on Monday that he asked the International Criminal Court (ICC) to set a date for submitting the case files pertaining to the settlements and war crimes lawsuits against Israel to the court.’I filed a request two days ago to the ICC to set a date so we can submit the case files of the settlements and Israel’s war crime lawsuits,’ al-Maliki told Palestinian radio, according to videonews.us.

‘We’re waiting for a date to be scheduled, and it might be in the middle of next month,’ al-Maliki said, adding that he ‘will head to The Hague for this [submitting the case files] once a date is set’.

On April 1st, Palestine officially joined the ICC after The Hague-based tribunal approved its accession bid.

The move came after an Arab draft resolution at the UN General Assembly seeking a deadline for ending Israeli occupation of Palestinian territories failed to win the nine votes needed to pass.

The ICC was established in 1998 as a court of last resort to prosecute the most heinous offenses – such as war crimes and crimes against humanity – in cases where national court systems had failed.