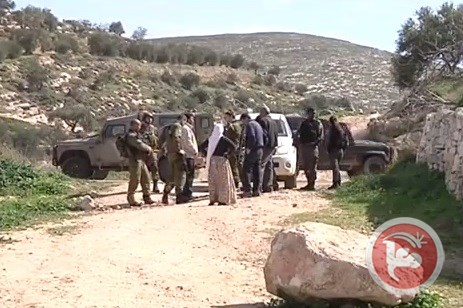 Israeli settlers from the illegal settlement of Bat Ayin, northern Hebron area, set fire to an estimated 25 dunams of Palestinian land on Monday, destroying up to 250 olive trees, a local committee reported.A spokesperson for the Beit Ummar popular committee, Muhammad Ayyad Awad, said that five Israeli settlers in white clothes between the ages of 16 and 20 had set fire to land in the Hilet Ikdeis north of Hebron.

Awad added that the land had been planted with olive trees, most of which were nearly 40 years old.
He said that Israeli forces arrived on the scene, but alleged that they refused the landowners’ demand that they call a firetruck to put out the fire.

The landowners said that they had been able to prevent the fire from spreading to other areas.

The fire comes a day after locals in al-Shiokh, northeast of Hebron, reported that 80 acres of land planted with hundreds of olive saplings had been vandalized by Jewish settlers from nearby illegal settlements.

Since 1967, approximately 800,000 olive trees have been uprooted by Israeli forces and settlers in the occupied West Bank, according to a joint report by the Palestinian Authority and the Applied Research Institute Jerusalem.