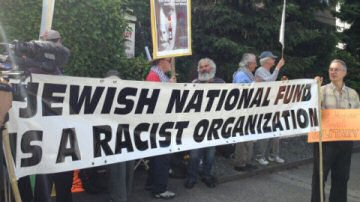 Tension is brewing between Israel and Finland over the Finnish World Village Festival’s decision to boycott the Jewish National Fund.The Jewish National Fund (JNF) in Finland registered to participate in the World Village Festival, an annual happening which focuses this year on development in Africa and the Middle East. The Israeli news portal nrg reports that several weeks following confirmation of its participation, JNF received notice from festival organisers that it could not participate “due to questions about the legality of its activities”.

A key pillar of the colonization of Palestine, the JNF was instrumental in the ethnic cleansing of Palestine in the 1948 Nakba and continues to play a central role in maintaining Israel’s regime of apartheid. The Palestinian National Committee for the BDS campaign notes that following the 1948 Nakba and the expulsion of approximately two-thirds of the Palestinian population from their homeland, “the JNF was repackaged as an environmentalist organization carrying out forestation activities and ‘greenwashing’ Israeli colonization of Palestinian land. Today, the JNF controls vast properties belonging to millions of Palestinians, developing them exclusively for persons of “Jewish nationality,” a concept established and promoted in the JNF’s charter to exclude all others.”

Israel’s ambassador to Finland, Dan Ashbel, furiously contacted the Finnish foreign ministry, which stated that the World Village Festival is a private event over which the government has no control. Ashbel then decided to exploit Holocaust Memorial Day to launch an attack, claiming there is no difference between anti-Semitism and anti-Zionism.

“The Holocaust was not a natural disaster”, Ashbel said during Finland’s offical Holocaust Memorial Day ceremony, as reported by nrg. Ashbel, in the presence of Finnish President Sauli Niinisto, continued: “The Holocaust was based on a precise political decision of the Nazi regime. The headline ‘Memorial Day for Victims of Murder’, as it appears on the official calendars of Finland, is deceptive and misses the special nature of anti-Semitism. In these very days it was decided by organisers of the World Village Festival to boycott the Jewish National Fund. I understand that the existence of a Jewish state in the Middle East does not fit the world view of the conference organisers, financed by Finnish public funds. They therefore decided to believe the general accusations of people who oppose the very existence of the state of Israel, and to get rid of the bother. I wonder how such a scandalous decision fits with values such as environmental development, fairness, tolerance and the desire for peace. It interests me if the other organisations participating in the festival were requested to meet this same standard. It is insufficent that the organisers announced they would agree to host the Jewish community, as there is no difference between anti-Zionism and anti-Semitism.’

Since 1995, the World Village Festival has been a free festival for the whole family. It describes itself as “open to all and a meeting place offering tastes of different cultures and surprises from all over the world”. The main organiser of World Village Festival is Kepa, an umbrella organisation for nearly 300 development organisations or other civil society groups working on issues concerning development and globalisation. Some 80,000 visitors attend the festival yearly.