Army Kidnaps Ten Palestinians, Including A Mother And Her Two Sons 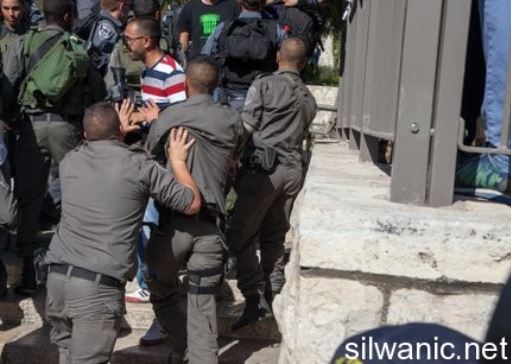 Coordinator of the Popular Committee against the Wall and Settlements in al-Khader Ahmad Salah stated that the soldiers searched several homes, and kidnapped Daoud Mohammad Salah, 17, his brother Omar, 15, in addition to Mohammad As’ad Sbeih, 17, and Jihad Omar Salah, 17.

He added that the soldiers violently searched the homes of the kidnapped Palestinians, causing excessive property damage.

Soldiers also handed the father of Omar and Daoud Salah a military order for interrogation in the Gush Etzion military and security base, south of Bethlehem.

Similar orders were handed to Jamil Qaher Abu Kamal, and his son Qaher, 29, from Bethlehem city, after the soldiers stormed their homes and searched them.

In addition, soldiers invaded homes in the al-Ein al-Foqa neighborhood, in Silwan town south of the Al-Aqsa Mosque in occupied Jerusalem, kidnapped a woman, identified as Asma’ Shioky, and her two sons Mos’ab, 25, and Mansour, 23 years of age.

Mohammad Mahmoud, one of the layers of the Ad-Dameer Prisoners Support of Human Rights Association, said the soldiers also kidnapped two children identified as Omar Syoury, 14, and Mohammad Syouri, 16, from Ras al-‘Amoud, in addition to Yassin al-Atrash, 16, in Sur Baher village, in occupied Jerusalem.

Also in Jerusalem, groups of Israeli fanatics and several officers stormed the courtyards of the Al-Aqsa Mosque, through the al-Magharba Gate, and conducted provocative acts.

Abu Qteish is an employee of the Islamic Waqf Department; he was attacked after trying to stop a police officer who was using foul language, and swearing at a Palestinian woman.

Eyewitnesses said the soldiers invaded the town, and clashed with several youths who hurled stones and empty bottles on their vehicles, while the army fired gas bombs, rubber-coated metal bullets and rounds of live ammunition.