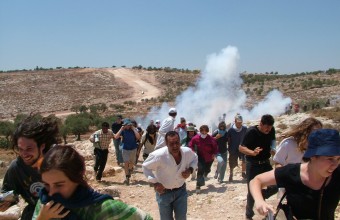 Media and popular struggle conference activities were launched in Bethlehem on Tuesday, in cooperation with a number of European journalists and popular struggle coordination committees, and will last for a week from now. A number of international human rights organizations are participating in the event, including Italian, French and Spanish associations. The event is financed by the European Union, according to the Palestinian News Network (PNN).

Munther Ameera, director of the popular struggle higher coordination committee, said that the media was an essential tool which Israel exploited very well to advocate lies and deception to the whole world, through American legislative bills.

And, so, the journalists will tour occupied Palestinian lands threatened with demolitions and displacements, to create awareness of the Palestinian life and to let justice prevail.

The journalists will start in the Jordan Valley with a political, geographic, economic definition of it. The tour will also show how it is being targeted by Israeli forces because of its importance.

The tour will also include trips to South Hebron Hills, including Susiya village, which the Israeli court recently ordered the demolition of to expand the Israeli settlement on its land.

Other villages that are known for popular struggle and resistance, and weekly demonstrations, including Kafr Qaddum, Nabi Saleh and Bil’in will be visited, and the circle will end in Bethlehem refugee camps, including Aida and surrounding villages.

The conference will include workshops, lectures and discussions, ending with recommendations for raising the European awareness of the Palestinian cause.

Popular struggle activist Mahmoud Zawahra said that the message of these workshops was raising the voice of Palestinians to reach out for the world and help to halt the ongoing demolitions, displacements and land theft by Israel, in addition to stopping the daily human rights violations.

Other than that, the experience exchange will enrich Palestinian media to form skills and benefit from internationals, to make it easier to spread.