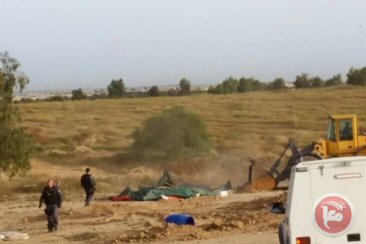 The Israeli Supreme court, on Tuesday, turned down an appeal, by the descendants of Sheikh Suleiman Muhammad al-Ukbi, against a three-year-old decision by the central court of Beersheba.The court, in 2012, refused a request to register 1,000 dunams (250 acres) of land in the villages of al-Araqib and Shariaa in northern Negev to their names as heirs of the original owner Sheikh al-Ukbi, according to Ma’an/AFP.

The Supreme Court also decided that the land should be registered under the name of the Israeli development authority.

‘The issue of Bedouin tribal rights to ownership of lands in the Negev is very important and an acceptable solution to both sides should be reached as soon as possible,’ the court decision read.

The court argued that during the era of the Ottoman Empire and the British Mandate, ‘rights were not granted to lands located far from populated areas.’

For their part, members of al-Ukbi tribe claim ownership of 19,000 dunams (4750 acres) in al-Araqib where they ‘have dwelled and cultivated the land for decades.’

They added that in 1951, the Israeli military authorities deported the tribe to the village of Hurah 20 kilometers east of al-Araqib citing security reasons.

The Supreme Court decided Tuesday that al-Ukbi tribe failed to prove ownership of the land, and so they are not entitled to receive reimbursement.

Human Rights Watch condemned the court decisions, which pave the way for the eviction of Bedouins and Palestinians from their villages, calling on the state to let them stay put.

According to Human Rights Watch, the villagers say they were expelled from their land in 1948, when the state of Israel was established, and while they have been allowed to live there, Israel never recognized the village or approved a zoning plan for it.

In 2009, Israel approved plans for a Jewish village on the site, which means the Bedouins will be forced to relocate.

They are to be compensated for the land they relinquish.

The court said that since the Bedouins could theoretically live in the new town, this did not constitute discrimination.

In a separate ruling, it gave the green light to military orders to demolish the southern West Bank village of Susya, and relocate its 340 Palestinian residents nearby.

Israel said Susya was built on an archaeological site, and has refused to approve plans for homes there.

‘It is a sad day when Israeli Supreme Court decisions provide legal cover for forced evictions, as in the case of these two villages,’ Sarah Leah Whitson, HRW’s Middle East and North Africa director said in a statement.

‘The Israeli government should let these communities stay where they are, not force them to move yet again.’
The court decisions ‘ignore international law in upholding discriminatory evictions by the Israeli authorities in Israel and the occupied territories,’ she added.

According to HRW, there are approximately 80,000 Bedouins in Israel living in unrecognized Negev villages that are under constant threat of demolition.

Israel has attempted to implement a plan that would regulate disputes of land ownership in the southern desert territory.

In the West Bank, Israeli authorities approved less than six percent of Palestinian building permit requests between 2000 and 2012, HRW said.

‘Israeli authorities’ zoning and demolition policies in the West Bank, in some cases, can effectively amount to forcible transfer,’ it said.