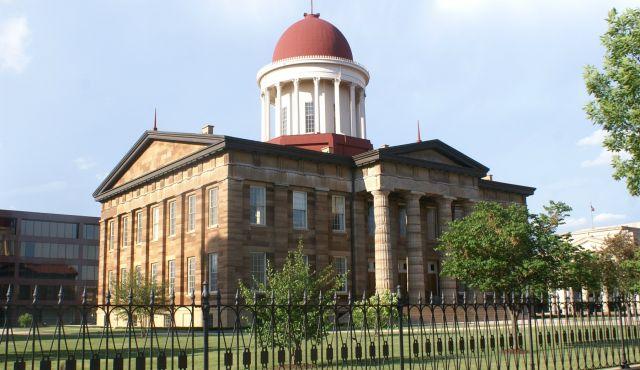 With Governor Rauner’s signature, Illinois will become the first state to legislate against the Boycott, Divestment, and Sanctions (BDS) Movement.

The anti-BDS bill outlaws the state pension system from investing in companies that boycott the state of Israel.

In 2005, Palestinian civil society called on the international community to stand in solidarity against the Israeli occupation with a campaign of boycotts, divestment, and sanctions (BDS) until Israel complies with international law and ends violations against Palestinian rights. In the decade since the BDS movement began, a global response to Israel’s system of Apartheid has emerged with significant results.

Israeli lobbyists in Springfield, Illinois’ state capital, have successfully conflated the BDS Movement with anti-Semitism. In numerous statements issued by Illinois legislators about the anti-BDS bill, there has been an echoing of Zionist propaganda which equates boycotting Israel with prejudice against Jews.

One of the main Zionist leaders in Illinois, president of the Chicago Jewish United Fund, Steven Nasatir, recently said, ‘At the core of the BDS movement is a quest to delegitimize Israel as a sovereign, democratic, and Jewish state.’ Mr. Nasatir continued, ‘This bipartisan legislation sends a strong message that Illinois will not tolerate such efforts.’

BDS proponents have responded to the Illinois bill by stating that this anti-BDS legislation proves the success of the BDS movement. The organization Jewish Voice for Peace has released a statement entitled, ‘Criticism of Israel is not anti-Semitism,’ citing an open letter from hundreds of academics calling on the U.S. State Department to revise its definition of anti-Semitism.

JVP’s press release states that over 250 members of their Academic Advisory Committee have signed an open letter to the State Dept. asking for a revision of its definition of the term anti-Semitism so that the charge of anti-Semitism may not be used to silence critics of Israel.

Once Illinois’ Governor Rauner signs the anti-BDS bill into law, Illinois will be the first U.S. state to enshrine such legislation. However, a number of anti-Palestinian lawmakers in the U.S. Congress are closely monitoring the Illinois bill’s success as a model for a similar federal law.

The Indiana and Tennessee state Legislatures have both previously passed non-binding resolutions opposing boycotts of Israel.