Video: Soldiers Kidnap A Father And His Three Sons In Their Store In Jerusalem 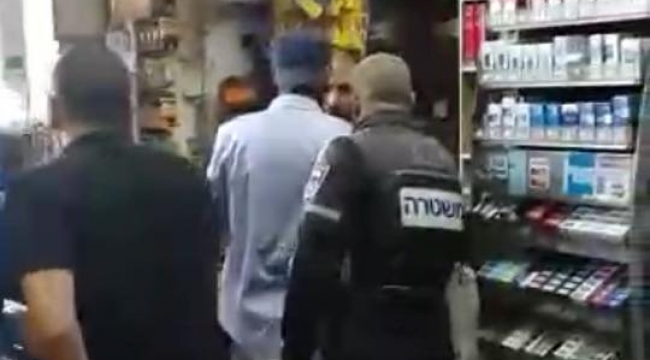 Israeli soldiers invaded, Tuesday, a Palestinian store in Beit Safafa town, in occupied Jerusalem, kidnapping the store owner and his three sons, after assaulting them along with other Palestinian shoppers.The Arabs48 News Website published a video showing the soldiers and police assaulting the family, in addition to attacking a woman who was shopping in the store.

The soldiers kidnapped the father, Abedrabbo Abedrabbo and his three sons, Abed, Talal and Bilal, after violently attacking and beating them.

The father told the Arabs48 that the police kidnapped him and his sons, took them to the al-Maskobiyya interrogation facility, and released him but kept his son under arrest.

“The police invaded my store, allegedly looking for Palestinian workers who don’t have entry permits to Jerusalem,” the father said. “They asked me for my ID, but I didn’t have it on me, so they started beating me up.”

“They then attacked my sons, and arrested them, before taking all of us to the police station,” Abedrabbo added, “I was released just a few minutes later, but my three sons are currently under interrogation in the al-Maskobiyya police station.”

He said that the attack was unprovoked, and just shows the racist nature of the police.

“They attacked us, beat us, and attacked our property, for nothing more than misinformation, and false allegations,” Abedrabbo stated, “They had no cause or justification whatsoever; they should be ashamed of what they did.”