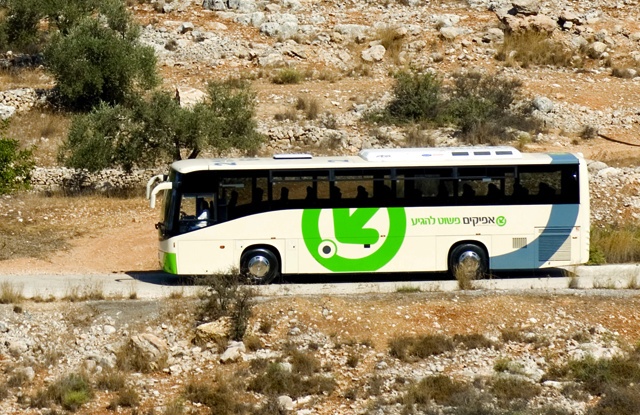 Israeli officials announced that beginning on Wednesday, the segregation that has been commonplace on buses traveling between the West Bank and what is now Israel has been made completely official, and no Palestinians will be allowed to travel on buses with Jewish Israelis.This discrimination based on ethnicity is a violation of international human rights conventions, but Israel justifies its racial and ethnic profiling based on ‘security’ concerns.

This new restriction will apply to Palestinians from the West Bank who have work permits inside Israel — permits which are increasingly difficult for Palestinian workers to obtain from the Israeli military authorities who control all aspects of life in the West Bank.

An unnamed official told reports with Agence France Presse that the segregated bus system would be put in place as a three month pilot project, and the Israeli Defense Minister Moshe Yaalon told the Israeli Army Radio that he had agreed to the system in order to have ‘better control of the Palestinians’ who enter and leave Israel for work each day.

The Palestinian workers will ride on the same buses as Jewish Israelis while inside Israel, but once they reach the Israeli-constructed Annexation Wall, they will have to exit those buses and board Palestinian-only buses in a system that critics say is reflective of the American South in the post-Civil War period known as the Jim Crow era, during which segregation and discrimination against non-white members of the population was legal.

In 2011, a group of Palestinian peace activists carried out a ‘freedom ride’ action to draw attention to the already segregated bus system in the West Bank by boarding buses meant for Jewish Israelis only. They were arrested. At the time, Palestinians were not explicitly banned from riding on those buses, but it was an unspoken rule that they could not step on board, because the buses were headed to Israeli settlements built on land seized from Palestinians and then walled off for the exclusive use of Israelis.

At that time, Bassal Arraj, who participated in the action, told reporters, ‘Under Israeli law we are forbidden to visit Jerusalem. It’s a racist law like the Jim Crow laws and the apartheid laws in South Africa.’

The ban on travel to Jerusalem remains in place four years later and now, the segregated bus system has been officially made into law, according to the Israeli defense minister.

This adds to the more than fifty laws already on the books in Israel that directly discriminate against non-Jews — most recently, a discriminatory law upheld by the Israeli Court on May 5th allows the Israeli government to completely demolish two Palestinian Bedouin villages in the Negev that have been there since well before the creation of the state of Israel in 1948 — due to the fact that these villages are ‘unrecognized’ by the Israeli government.