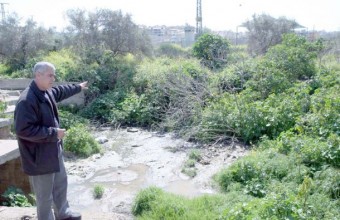 The farmers and citizens of Salfit city, and of Kafr Al-Deek town, in the southern occupied West Bank, on Sunday, made complaints about the dangerous environmental damage they were facing because of the skunk water poured by the illegal Israeli settlement of Ariel.Farmers said, according to the PNN, that the pollution is causing hideous smells and contamination of surface and groundwater after mixed with settlement sewage water.

Researcher and activist Khaled Ma’ali said that the Ariel settlement and university daily pour more than 10,000 cups of sewage water in Palestinian areas, causing the pollution and contamination of many water springs and soil, sabotaging the most touristic natural areas in Salfit.

Ma’ali added that 24 settlements and 4 industrial zones were draining the environment and spreading unemployment by engorging land and releasing pigs in agricultural zones, which was damaging the economy in Salfit severely.

The sewage water problem has been on for years now. In December, Eyewitnesses and Palestinian shepherds on complained that the factories in the Industrial Zone of ‘Burkhan’ Israeli Settlement near Salfit, North West Bank, every Thursday and Friday utilize the weekend, to pour waste-water all at once in the Salfit valleys.