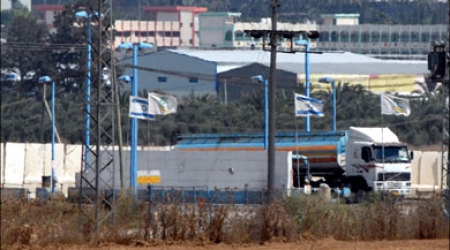 Israel closed the Gaza Strip’s only functioning commercial crossing (Kerem Shalom), on Sunday, for the Jewish holiday ‘Feast of Weeks’, a Palestinian official said.’The Israeli closure would disrupt trade traffic in the strip and negatively affect the flow of fuel into the enclave,’ Mounir al-Ghalban of Gaza’s border authority said, according to World Bulletin/Al Ray.

Blockaded by Israel – by air, land and sea – since 2007, the Gaza Strip has seven border crossings linking it to the outside world.

Six of these are controlled by Israel, while a seventh – the Rafah crossing – is controlled by Egypt, which keeps it tightly sealed for the most part.

Israel sealed four of its commercial crossings with Gaza in June 2007 after Hamas wrested control of the strip from the West Bank-based Palestinian Authority.

The Kerem Shalom crossing is dedicated to commercial use, while the Erez crossing is generally used for the movement of individuals between the blockaded Gaza Strip and the occupied West Bank.