Despite Deteriorating Health, Adnan Ongoing With His Hunger Strike 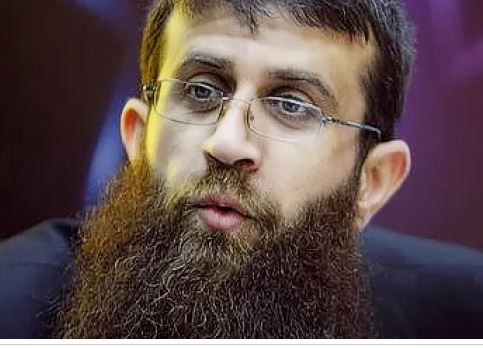 The head of the Palestinian Detainees’ Committee Issa Qaraqe’ warned of serious complications, and life-threatening health setbacks, as detainee Khader Adnan continues his hunger strike for the 23rd consecutive day.Qaraqe’ said Adnan, held in solitary in the Ramla Israeli Prison Clinic, is refusing even vitamins or any sort of treatment, and that he is only drinking water.

He suffered a serious weight loss, severe headache, and sharp pain in his joints and abdomen areas, in addition to general weakness, and fatigue.

Qaraqe’ held Israel and its Prison Authority responsible for the life and well-being of the detainee, and said Adnan is demanding an end to his illegal, arbitrary Administrative Detention, without charges, in direct violations of all international, legal and humanitarian laws and treaties.

He also said that many Palestinian political prisoners, held under Administrative Detention, threatened to join the strike, and even to expand it very soon, to reach all prisons and detention centers.

Israel is holding captive around 500 Palestinians under Administrative Detention orders; some were taken prisoner years ago and never faced charges.

Qaraqe’ said more than 30% of the Administrative Detainees received renewed orders at least once.

On Thursday May 21, the Detainees’ Committee said Adnan was only consuming water and salt, rejecting medical checkups and any sort of supplements. http://www.imemc.org/article/71665

15 of them were taken prisoner more than 25 years ago, 30 more than 20 years ago, and 30 others were captured before the First Oslo Agreement of 1993.