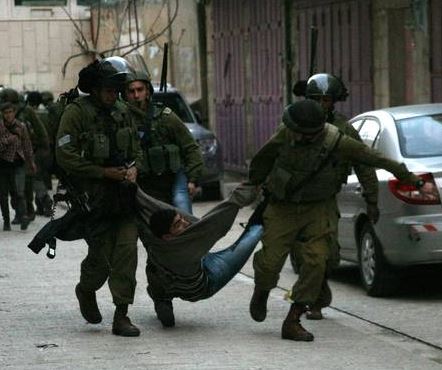 Israeli soldiers kidnapped, Thursday, two Palestinians in the West Bank districts of Hebron and Jenin, and searched several homes; soldiers also handed one resident from Bethlehem a military order for interrogation. Media sources in the Hebron district, in the southern part of the occupied West Bank, said the soldiers invaded several towns, searched many homes, and kidnapped one Palestinian.

The kidnapped resident, Monir Jawabra, was taken prisoner from his home in the al-‘Arroub refugee camp, in Hebron, before the soldiers moved him to the Etzion military base.

In addition, soldiers installed a number of roadblocks near Jenin city, and in its western part, stopped and searched dozens of cars, and investigated the ID cards of the passengers.

The roadblocks were mainly installed on the entrances of al-Yamoun and Kafr Dan towns, and the main “Jenin-Haifa” road.

In Bethlehem, soldiers invaded the Deheishe refugee camp, south of the city, and handed Shehab Mizher, an order for interrogation in the Etzion military base, south of Bethlehem.