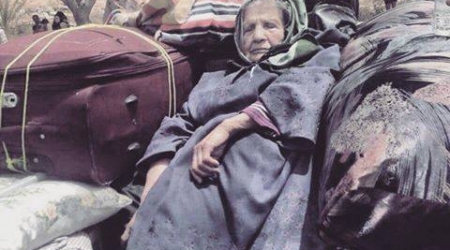 Yousra Omar Al Najjar, an elderly woman of 77, died on Wednesday evening, in Gaza’s European hospital, after a case of fatigue she sustained during her way back to the region via the Rafah crossing.The authority of crossings and borders in the Gaza Strip issued a statement explaining that Al Najjar was taken from the Egyptian hall to Al Arish hospital, accompanied by Egyptian army vehicles, where she received treatment before being transferred to the European hospital after entering Gaza.

Al Ray reports that, according to a relative of the elderly woman, while she was waiting on the Egyptian she fainted due to a ‘sun stroke’ caused by the high temperatures. The relative added that he tried to coordinate to facilitate her entry to Gaza, and that she was then transferred to the Palestinian side of the crossing, then to the European Hospital, where the doctor told them that she passed away ‘since a period of time’.

Earlier, on Tuesday, Egyptian authorities opened the Rafah crossing on Tuesday, for the first time in nearly 80 days, to allow stranded Palestinians to return to the Gaza Strip. But, it did not allow traffic in the other direction, leaving thousands of Gazans, some of whom need to travel for medical treatment, stuck inside the Gaza Strip.

Since the Egyptian army ousted Islamist president Mohamed Morsi in 2013, Cairo has largely kept Rafah, the main gateway to the Gaza Strip, closed.

It occasionally opened the crossing to allow passengers with foreign passports, as well as students and patients to travel. Israel also has strict limitations on Palestinian travel through its border with Gaza.