Israel 2015: A Government of Extremists in Charge of An Out-of-Control Military 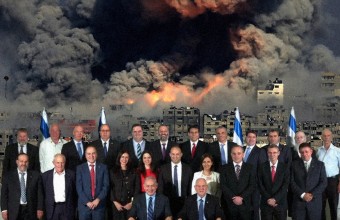 Shocking words from Israeli officials’ and soldier testimonies of criminality reinforce immediate need for arms embargo and other sanctions, says the IPSC.According to the PNN, the Ireland-Palestine Solidarity Campaign has distributed a new briefing paper to members of the Irish Parliament, members of the European Parliament and members of local Irish councils.

The IPSC stated its intention to give ‘vital context to developments in the region’ – from the ‘Israeli soldiers testimonies about war crimes and murder of civilians, to the extremist statements by leading members of the Israeli political and military echelons’ – which it said too often went unreported in the Irish media.

Titled Israel 2015: A government of extremists in charge of an-out-of control military, the paper is an in-depth investigation the extremist nature of the new Israeli government, the shocking views of its leading members, and the appalling recent record of the Israeli occupation forces in Gaza. Finally, the IPSC statement said, the document makes a series of recommendations that the Irish government must allegedly take to help ensure that Israel is held to account for its actions, and that the Palestinian people receive the justice they so richly deserve.

Related: ‘We Bombed Civilians for Entertainment.’

Report: Israeli Soldiers Describe ‘Losing Their Sense of Morality’ During the Gaza Conflict

The Israeli officials’ words and soldiers’ testimonies contained in the document reinforce the immediate need for arms embargo and other sanctions against Israel, a course of action that Western governments have so far refused to follow, with predictably tragic results for the Palestinian people.