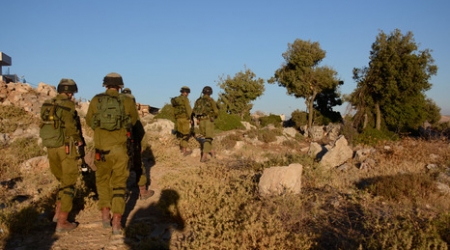 Israeli occupation forces stormed, on Sunday, the Marg Ibn Amer plain, west of the city of Jenin, in the northern occupied West Bank, and launched a broad campaign in search of water wells in the region.Farmers said, according to Al Ray Palestinian Media Agency, that Israeli military patrols roamed in agricultural land corresponding to the towns of Silat al-Harithiya, Tanak in Marg Ebn Amer and also raided greenhouses in the area, inspected and searched for water sources.

Palestinian farmer Mohammed Jaradat pointed out that the Israeli soldiers’ interrogated citizens inside their territories on how they irrigate their crops and threatened to shut the wells that they discover.

Soldiers also raided agricultural nurseries belonging to Abdul Rahman Zayoudat, at Haifa Street, near the entrance to the village.